*I received a free ARC of this story, with thanks to the authors.  The decision to review and my opinions are my own.*

Blurb:  Within the tangled vines of a forgotten garden, can a blossoming new love overcome an ancient evil that threatens both the living and the dead? 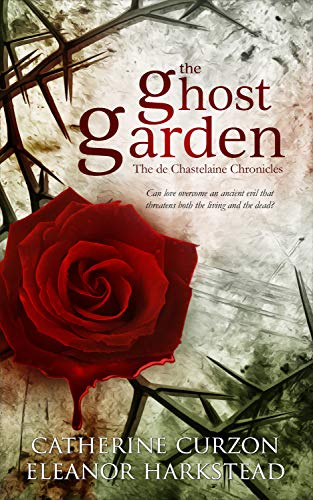 After losing her brother in the trenches of the Great War, Cecily James is a prisoner of Whitmore Hall, the respected but remote boys’ school where her brutish husband reigns as headmaster. With its forsaken walled garden, a hauntingly tragic past, and midnight footsteps heard from an unoccupied clocktower, Whitmore Hall is a place where the dead are rumored to walk.

Whitmore Hall is a place filled with mysteries and as a ghost garden emerges from the sun-bleached soil, long-buried secrets cry out to be told.

When new teacher Raf de Chastelaine blunders into an impromptu seance, Cecily finds an unlikely and eccentric ally. In a world of discipline and respectability, barefoot Raf is unlike any teacher Cecily has ever met. With his tales of the Carpathian mountains and a love of midnight gardening, he shakes Whitmore Hall to its foundations. Could there be more to Raf than meets the eye? And as he and Cecily realise that their feelings run deeper than friendship, dare they dream of a world beyond Whitmore Hall?

As Cecily and Raf team up to unite long-dead lovers and do battle with an ancient evil that has long haunted Whitmore Hall, Cecily finds her chance of happiness threatened by her tyrannical husband. But is the controlling headmaster acting of his own free will, or is he the puppet of a malevolent power from beyond the grave?

This book promises to be the first in a series of de Chastelaine Chronicles and it will be interesting to see where the authors go next with the characters: there is so much scope for adventure with Raf’s dashing persona and danger-ridden vocation (Latin teaching can be perilous!)

On a more serious note, this a traditional paranormal, somewhat-Gothic, romance.  The main character, Cecily, is trapped in a loveless and abusive marriage (triggers for physical, emotional and sexual violence) and her only distraction is the mysterious ring she found amongst the roses and the weeping ghost who seems to need her help.  Her only distraction until a certain short (and definitely sweet) Latin substitute teacher arrives to give her shivers of an infinitely more pleasurable kind!

Obviously there are ghosts involved in the story, and the authors draw on other elements of mythology and paranormal too, especially for some of the lighter-hearted elements of the plot.  Mostly though this is a love story of kindred spirits finding each other (or reuniting) against the odds.  Definitely recommended for fans of historical romance with more than the main characters going bump in the night!

The mantelpiece clock ticked on, counting out the empty seconds.  The sound of the piano had stopped and, into the silence, Harriet called, “Can anybody come forward?  Sandy or perhaps the lady who lost her ring in the rose garden?  We’d love to know who gave you such a pretty trinket.  Who was C?  Were you one of the Whitmores of Whitmore Hall?”
One of the candles guttered, the flame sputtering and dying as though someone had passed a breath across it.  Then it flared again, the wick spitting back into life.
“Is there a Whitmore with us?”
Thump.

One thought on “The Ghost Garden – Catherine Curzon & Eleanor Harkstead”