*I received a free ARC of this book.  The decision to review and my opinions are my own.*

Blurb:  Tucked next to a pristine lake, the part-Medieval Europe, part-Renaissance Faire hamlet of Whispering Pines, Wisconsin is a utopia . . . except for the recent murders. 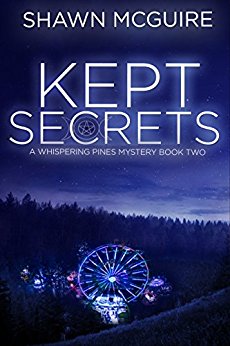 One month after arriving in the Northwoods, former detective Jayne O’Shea has settled comfortably into small town life and is making good progress with her task of getting her grandparents’ house ready for sale. Then the shocking death of one of the carnies rocks the community, and the villagers look to Jayne for help, placing her in an impossible middle ground of not wanting to get involved and needing to ensure justice is served.

When a second carney turns up dead, and the newly hired sheriff—more concerned with ticketing tourists than catching the killer—dismisses the death as an accident, Jayne has no choice but to step in. Can she uncover the truth before the murderer strikes again?

Shawn McGuire has really got into her groove with this, the second in the Whispering Pines series.

The characters and setting feel well-established but fresh, and the mixture of police-procedural crime with ‘woo-woo’ magic felt well-balanced and kept either aspect from feeling stale or well-trodden.

I really liked how Jayne struggles in this one with her own balance between personal and professional; house or work; friends or more.  There is a lot of tension and no obvious right answers, which felt very authentic.  Jayne’s difficulty in pinpointing her longterm priorities whilst firefighting immediate problems resonated strongly with this working mum (different issues, same problem)!

I noted that the surprising incidence of murder in a small, close-knit community has a plausible explanation in the ongoing mystery surrounding the establishment of said community and the suspicious death of one of its founders.  This wider mystery, which seems set to span the length of the series is gripping, but well-integrated into the plot, so doesn’t intrude on the individual murder story arc of each book.

The greatest pleasure in this series though, is Whispering Pines and its residents.  There is a real community feel coming through, despite the clear differences between people, and that sense of acceptance really warmed me and had me rooting for not just individual characters, but the town as a whole.

There is obviously something deeply wrong in the town and I am thoroughly invested in Jayne and her cohorts uncovering the mystery and resolving it so that the misfit town can really bloom into what it was intended to be.  Also, I’m fervently hoping that she finally gets half a clue with her love life!

In other words, I believe in this story and these characters.  More please!

This was where I was meant to be, I had no doubt.  I also had no job here, which meant as soon as the renovations were done, my parents were going to put the house on the market.  Then, I’d have nowhere to live and no choice but to leave.

For more from Shawn McGuire, check out her website here.