*I received a free ARC of this novel, with thanks to the author, HQ – Harper Collins UK and NetGalley.  The decision to review and my opinions are my own.*

Blurb:  IN THIS WORLD, PERFECTION IS EVERYTHING 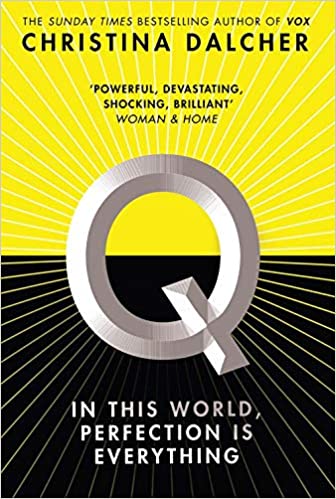 Elena Fairchild is a teacher at one of the state’s new elite schools. Her daughters are exactly like her: beautiful, ambitious, and perfect. A good thing, since the recent mandate that’s swept the country is all about perfection.

Now everyone must undergo routine tests for their quotient, Q, and any children who don’t measure up are placed into new government schools. Instead, teachers can focus on the gifted.

Elena tells herself it’s not about eugenics, not really, but when one of her daughters scores lower than expected and is taken away, she intentionally fails her own test to go with her.

The stories follow similar themes, but the story in Q is just as gripping and compelling as its predecessor, despite the similarities in the content.

It is clear from very early on that something has gone wrong within the governing system in Q, as Elena is perfectly positioned in her teaching role to realise that top students should not be falling foul of the scoring system… clearly some form of corruption is at work.  To the reader, the very system itself is horrific enough, even if it were functioning exactly as it had been meant to.  And yet, as the author notes when she recounts the genesis of the movement, it is merely a different basis for a judgement system society already uses in real life.  Where our reality is governed by factors like skin colour, physical attractiveness, accent, weight or genital equipment, the society in Q uses intelligence test scores, moral choices, and emotional expression (among other data) to segregate and reward / punish people.

The most chilling thing, as with Vox, is just how plausible the whole scenario is.

There are obvious comparisons to Nazi Germany and to novels like 1984, but the currents of fear of anyone different or ‘imperfect’ ring terribly true to alert readers following current world events.

There are triggers warnings here for domestic abuse and control, child abuse and attempted rape.  These incidents are not dwelt on salaciously, but form a small part of the building picture of powerlessness, helplessness, for those judged less than worthy.  I have never hated a fictional character more than I hated Malcolm in this book.  He is utterly vile, yet – again – plausible.

The main emotions I felt as I read this story were anger, grief and fear, and a real, physical nausea caused by my anxiety for the main character and her friends and family members.  I can definitely confirm that I was invested and immersed throughout!

Fans of dystopian fiction based on political and societal realities, taken to the extreme, will enjoy Christina Dalcher’s books, as will fans of domestic thrillers.  I can’t wait to see what horrific truths she exposes for us next!

I almost can’t remember how it felt before we all started carrying the Q numbers around with us, like an extra and unnatural print on the tips of our fingers, a badge of honor for some, a mark of shame for others.  I suppose, after more than a decade, you can get used to anything.  Like cell phones.  Remember not having the entire universe in your back pocket?  Remember sitting on the floor, talking to your best friend about nothing, unwinding a curly cord only to watch it kink up again?  Remember all that?  I do and I don’t.  Blockbuster two-day video rentals and bookstores the size of an airplane hangar are distant memories, faded impressions of life before streaming and same-day delivery.

It’s the same way with the Q numbers, although we’ve carried numeric strings with us in one form or another for most of our lives: our social security numbers for tax returns; our home telephone in case of an emergency call to Mom became necessary; our grade point averages that would fill boxes in dozens of college application forms.  Men, in a clothing store, became thirty four long or sixteen-and-a-half, thirty-three.  Women became dress sizes: six, eight, fourteen.  In the more upscale shops, we were our measurements.  In doctors’ offices, we were our height and weight, watching one number creep down while the other number crept up.

We’ve always been our numbers.  DOB.  GPA.  SSN.  BP (systolic and diastolic).  BMI.  SAT and GRE and GMAT and LSAT; 35-22-35 (Marilyn, damn her); 3 (the Babe).  PINs and CSCs and expiration dates.  Jenny’s phone number from that old song.  And, for the extreme among us, the entire sixteen-digit sequence on our Visa cards.  Our ages.  Our net worths.  Our IQs.

You can find my review of VOX, by the same author, here.