*I received a free copy of this book, with thanks to the author. The decision to review and my opinions are my own.*

Blurb:  Following the battle between Thaedis and Rezaaran, The Anmorian Legends: Legacy of the Sentinels sees the young War Mage embark on a journey of redemption. However, in the wake of Thaedis’s victory on Zynoo, the Intergalactic Revolution of Independent Systems (IRIS) has lost a considerable margin against the tyrant’s Obsidian Dominion. The hope of freedom seems ever more distant. Despite the odds, Rezaaran remains steadfastly determined and endeavours to unite a group of fabled warriors. But will this be enough to save Anmor from the coming darkness and defeat the nefarious villain who has bested him once before?

Legacy of the Sentinels is a high sci-fi/fantasy book, the second in the Anmorian Legends series.  Personally I think it would be best to read Wrath of the Exiled first (which I didn’t), as there is a lot of worldbuilding and character development hinted at in this instalment and I think that this book was harder to get into for lack of that background.

Once you do get going however, this story is packed with action, magical and weapon-based, and heroic sacrifice.  The characters are a noble band of warriors and sages and the overall arc is one of good vs. evil.  We see the main characters repeatedly tried and tested, tempted and tormented, in a constant attempt to turn or break them.  They (especially Rezaaran) must repeatedly prove their virtue in all aspects to prove worthy of the legendary heroic path assigned to them.

There is also a strongly spiritual element to the story, with faith repeatedly explored: faith in oneself, faith in one’s companions, faith in a higher power or destiny.  This is also mirrored in the virtue-testing of the characters and in the constant battle, not just with external forces, but against the darkness within every individual.

This is a very complex novel.  The story spans space and dimensions, and there are multiple locations, masses of named characters (some inhabiting the same physical body), Archlords, Sentinels, Guardians, different races, titles and creatures.  I imagine that reading book one would give you a head start on familiarity with the worldbuilding here, but for newcomers like myself, concentration is required in order to follow the intricacies of the story.

The Anmorian Legends series is a true epic; fusing sci-fi technology and space exploration, fantasy magic and creatures, and spiritual philosophies.  I would recommend it for anyone looking for a weightier read set in an entirely new universe.

Beyond this place of wickedness, wrath, and horror, Rezaaran sensed a flicker of hope that the Light would return.  It resided in the presence of Kashari.  She was the custodian of this realm, the mentor and dear friend who had saved him numerous times through her surreptitious interventions, never once asking for gratitude or recognition but selflessly fulfilling her role.  It was now his turn to reciprocate the kindness the Elder Mage had shown him.
Rezaaran set off at a run down the ramparts, his bare feet noisily splashing through puddles as he sprinted to the courtyard – where he sensed Yudhara.

– D. N. Pillay, The Anmorian Legends: Legacy of the Sentinels

The Anmorian Legends: Legacy of the Sentinals is available on Amazon right now! 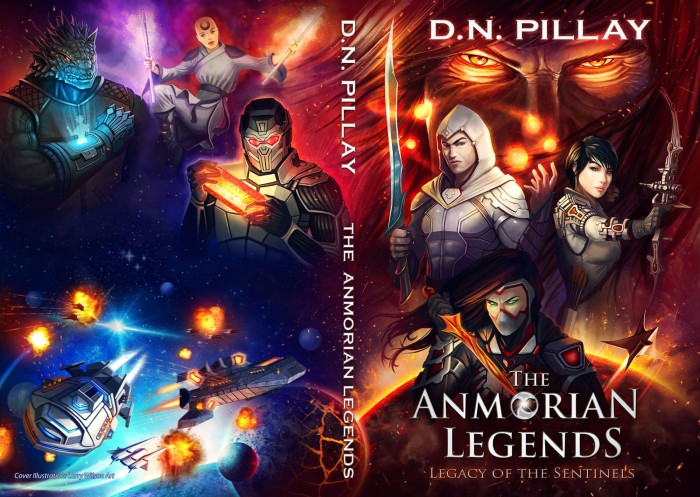