*I received a free ARC of this novel, with thanks to the author, Cornerstone / Penguin Random House and NetGalley.  The decision to review and my opinions are my own.*

Blurb:  Retired publisher Susan Ryeland is running a small hotel on a Greek island with her long-term boyfriend. But life isn’t as idyllic as it should be: exhausted by the responsibility of making everything work on an island where nothing ever does, Susan is beginning to miss her literary life in London – even though her publishing career once entangled her in a lethal literary murder plot.

So when an English couple come to visit with tales of a murder that took place in a hotel the same day their daughter Cecily was married there, Susan can’t help but find herself fascinated.

And when they tell her that Cecily has gone missing a few short hours after reading Atticus Pund Takes The Case, a crime novel Susan edited some years previously, Susan knows she must return to London to find out what has happened.

The clues to the murder and to Cecily’s disappearance must lie within the pages of this novel.

But to save Cecily, Susan must place her own life in mortal danger…

The sequel to Magpie Murders, Anthony Horowitz returns us to both Susan Ryeland (was editor, now holiday island hotelier) and Atticus Pünd (detective and literary creation of unlikable previous victim, Alan Conway) for another book-within-a-book murder mystery homage to Dame Christie and the ‘golden-age’ of classic crime.

Yet again, one of Alan Conway’s books turns out to be related to a real-life murder and his long-suffering editor is dragged back to England – not entirely reluctantly – to try to help find a missing person using her knowledge of Conway’s twisty literary style and her personal talent for spotting inconsistencies – invaluable for both editor and amateur sleuth.

I became a little irritated with Susan initially, as she has been called in to the case specifically in order to bring her editorial insight to bear, yet seems to spend the first third of the story doing everything she can to avoid picking up the damn book!  Eventually she does, however, and then we readers are treated to a reproduction of the entirety of Atticus Pünd Takes the Case, complete with fictional title page and copyright notices.

This is the aspect of these novels I really enjoy, and Horowitz has outdone himself this time round, as the story and characters in the meta-book are clearly linked to Susan’s investigations, but obscure enough to make the reader work hard for their clues.  Not only did I have no idea who committed the fictional murder, but I struggled to match all of the suspects to their fictional counterparts, even whilst already knowing who some of them were meant to be.  It’s not often I am stumped with a cosy mystery and it feels really good value for money too: two murder mystery books for the price of one!

As if all of this wasn’t clever or well-written enough, the final after-reveal, in which Susan returns to Alan’s novel again and unravels all of the additional puzzles, clues and ‘jokes’ hidden therein, is incredibly satisfying, whether you spotted them all or not.

I hope that poor Susan gets dragged in to more murder plots in future somehow – sorry, Susan! – because I love these books: as homages to classic detective fiction; as hidden puzzle adventures; as a book lover, getting to analyse and deep-read a text alongside a pro; and finally, as entertaining murder mysteries in their own right.

‘Can you tell me what happened on the night of the murder?’ I asked and even as I uttered the words I felt slightly ridiculous.  They sounded so old-fashioned, so clichéd.  If I’d seen them in a novel, I’d have edited them out.

Moonflower Murders releases on Amazon on 20th August 2020, but you can preorder your copy now! 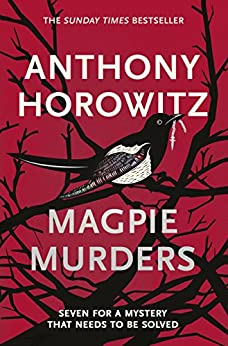