Technology has gone rogue in Universia. Everything from robots, computers, even vending machines are in revolt, doing anything they can to harm anyone made of fleshy goodness. And who is the fleshbag they want to harm the most? 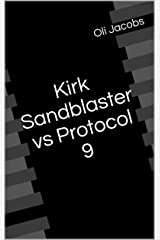 Once again, the space adventurer finds himself – and his alien sidekick, Xlaar – facing off against an enemy that threatens every beings existence. But, could the mind behind this rebellion be someone close to the duo? And if so, how can they defeat someone they love?

Jump once again into the 4 Quadrants of Universia, and the adventures of cocksure rogue, Kirk Sandblaster. A science fiction comedy fuelled by bad ideas, good intentions, and plenty of sandwiches.

Readers call Kirk Sandblaster “a fast-paced action comedy”, “exotic and esoteric”, and “reminiscent of Douglas Adams”. But don’t take their words for it, grab the latest Kirk adventure and find out for yourself!

This is the seventh Kirk Sandblaster book and while some of them can be read as standalone books, there is a benefit of reading them in series order and getting the characters’ backstories.

You get a head start with this instalment in that respect, as the first chapter takes us all the way back to Kirk’s childhood, showing us the start of the kind of AI that we see in Kirk’s adult adventures, like Navi or some of the prosthetics that characters like Xlaar and Beansmith rely on.

Then we skip back to ‘present-day’ Kirk and Xlaar, as they find out quickly – and violently – that technology is out to kill humans in general, and Kirk in particular, due to something called ‘Protocol 9’.  Cue the usual silly shenanigans, where Kirk charges wilfully into obvious danger and makes increasingly stupid decisions (and sandwiches), staying alive through a combination of dumb luck and the reluctantly heroic efforts of an exasperated Zaarian sidekick with anger issues and a soft spot for his pet idiot.

A wild mixture of Robocop, Skywalker, Hitchiker’s Guide and Red Dwarf, the Kirk Sandblaster books never fail to provide entertainment, in the form of a chaotic and light-hearted, space action-comedy.  The ending here is one of those ‘they think it’s all over’ ones, leaving a tantalising ‘To Be Continued…’ leading off in the direction of the next instalment (rather ominously titled, ‘Kirk Sandblaster Faces the End’ – see my interview with the author for some insider information on this front!)  And I’ll leave you with some wise words from the author himself:

‘While it is a series, and you may get more out of it by reading the previous books, I think the main thing is to enter the book with a sense of fun. Nothing is too serious, and if it is, then you have to find the lighter side. So, don’t worry about weird alien names or complex sounding futuristic technology, just enjoy the ride.’

With a wide yawn, Sandblaster tried to keep himself awake.
“You really need to stop talking.”
“But I have something to say.”
“Well make it quick, I’m getting drowsy here.”
“I must kill you.”
Both Sandblaster and Beansmith looked confused.
“Say that again?”
“I must kill you, Kirk Sandblaster.”
“Did you hear that, Kirk?”
He’d fallen asleep again.  Luckily, this time Beansmith didn’t need to nudge him awake.  Unluckily, this was because the sound of the Bounty firing up, and Navi announcing the activation of its weapons was enough to shake the space adventurer out of a dream world of delicious sandwiches and thrilling adventure.
“What’s going on?”
“Die.” Navi said, as the Bounty’s weapons began to whirr with the imminent blasting of several lasers.
Directed straight at Kirk Sandblaster. 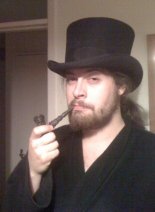 Kirk Sandblaster vs Protocol 9 is available on Amazon right now and you can read my interview with the author about it here.

For my review of Oli Jacobs’ The Lament of the Silver Badger check here, for The Space Adventures of Kirk Sandblaster have a look here, for Wrapped Up In Nothing, try here, for Strange Days in High Wycombe  have a nosy here and for Suplex Sounds of the 70s here.  Plenty of OJ for everyone! 😀