*I received a free ARC of this book, with thanks to the author. The decision to review and my opinions are my own.*

Blurb:   After a divorced Chicago father is charged with killing his girlfriend and unexplainable secrets about her come to light, he’ll have to figure out how much he’s willing to risk to find out the truth . . . and how much of it he wants to know. 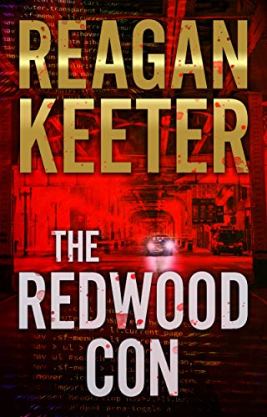 Liam Parker finds his girlfriend, Elise, dead in the bathtub, wrists cut. Suicide, he figures. But the truth turns out to be more complex than anyone might expect. While trying to clear his name, Liam uncovers clues that suggest Elise was not who he thought she was: she was living under an alias, has a record, and lied about where she worked and where she grew up.

Making matters worse, his relationship with her has tied his fate to those of a conman and a stock broker, neither of whom he has ever met. And as these three men’s lives hurl unexpectedly toward each other, Liam learns he’ll have to do more than just prove he’s innocent—he’ll have to unravel a mystery that threatens to destroy everything he cares about.

The Redwood Con is the kind of thriller that will keep you guessing until the very end.

Pick up your copy today!

The Redwood Con is a gripping suspense thriller with, as the title suggests, a few surprises up its sleeve.

The main character is Liam Parker, who stands accused of the murder of his girlfriend, and finds his efforts to clear his name just tangle him further in a complicated web of thieves, gamblers and confidence tricksters.  And, of course, one of them is apparently not averse to a bit of murder on the side.

As the net tightens around Liam and he struggles to prove his innocence against an increasingly clever frame job, we start to build a picture of the lies and subterfuges all around him and it becomes ever clearer that Elise was not all she seemed.

Reagan Keeter tells the story from a variety of different character viewpoints, which allows the reader access to information that Liam doesn’t have and lets us feel very clever as we keep one step ahead of the characters in piecing the clues together.  Until suddenly he turns a cup and the dice we thought we were following isn’t there!

I was fascinated by the various con trick details scattered throughout the book and it certainly made me feel more wary about everything from walking down a busy street, to how I choose my security passwords.  The world of confidence tricksters is one of smoke and mirrors, and exceedingly unnerving.

I really felt for Liam too; it was nerve wracking watching the trap inexorably close in on an innocent man, with no obvious way for him to escape it.  Similarly, it  was great to see the plot ‘from above’ almost, and be able to see the threads of the individual characters crossing back and forth before eventually converging for the climax and reveal.

Recommended for fugitive thriller fans who enjoy tight-spun plot patterns and an intimate cast of characters.

From the window, Elise could see the quiet, tree-lined street that ran in front of her building.  The old three and four-story condominium buildings lining most of it were charming.  The neighbours were friendly, and she could walk to a grocery store and a coffee shop.
She hoped that after tonight she wouldn’t have to leave.  She hoped that by being honest with Liam her life would become something new and better than it was now.  But if he didn’t take the news well, she knew she’d have no choice.  She’d pack up the things she could as soon as everyone was gone and disappear.

The Redwood Con  is out now, and you can buy it by following this universal link.

The author will be giving away 10 signed copies. For a chance to win, a reader should buy the book or e-book between May 5 and May 10 and email a copy of their receipt to redwoodcongiveaway@reagankeeter.com.