Popping in to give you all a quick heads up that Jonathan Harries Ink is running a fantastic giveaway to win a Kindle Paperwhite, his Roger Storm trilogy on Kindle and one of his “Saving Wildlife” t-shirts!

The giveaway ends on Friday 1st May 2020 so hurry up and join in now!

Jonathan Harries began his career as a trainee copywriter at Foote, Cone & Belding in South Africa and ended it as Chairman of FCB Worldwide with a few stops in between. After winning his first Cannes Lion award, he was offered a job at Grey Advertising in South Africa, where he worked as a copywriter and ended up as CEO at age 29, just before emigrating to the US. Like most immigrants in those days, he started once again from scratch. After a five year stint as Executive Creative Director of Hal Riney in Chicago, he was offered a senior position at FCB. Within ten years, he became the Global Chief Creative Officer and spent the next ten traveling to over 90 countries, racking up 8 million miles on American Airlines alone.

He began writing his first novel, Killing Harry Bones, in the last year of his career and transitioned into becoming a full-time author a year ago, just after retiring from FCB. He’s been writing ever since while doing occasional consulting work for old clients.
Jonathan has a great love of animals, and he and his wife try to go on safari every year. They’ve been lucky enough to visit game reserves in South Africa, Botswana, Namibia, Zimbabwe, Rwanda, Tanzania, India, and Sri Lanka. 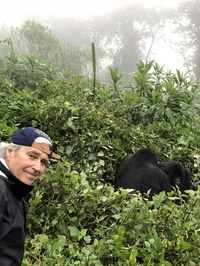