Salt + Stilettos released yesterday and I am lucky enough to have an excerpt to share with you all, for my stop on the blog tour today.

But first, here’s the book!

Blurb:  Sweet Home Alabama meets Top Chef when Miami’s most determined image consultant clashes with Samoa’s most uncooperative chef in a race to rebrand him as South Beach’s newest star.

Brett Fontaine learned early that appearance matters and not to count on anyone but yourself. Trading her red-dirt roots for the title of Miami’s go-to image consultant, she refuses to let anything jeopardize her new life.

Not an influential client-turned-stalker who’s up for parole.

Certainly not the stubborn, attention-phobic chef she’s challenged to transform into a celeb in ninety days.

Will Te’o can almost taste the dream he sacrificed American Samoa, culture, and cherished family ties for—opening a four star restaurant in the most cut-throat culinary location in North America.

Unfortunately, that requires navigating it’s equally cut-throat social scene. When his first public performance ends in a social media spectacle, his only option is turning to the stiletto-wearing nemesis who’s invaded his kitchen.

Neither expected to share anything but barbs, yet somewhere between accidentally bonding over comfort food and office-wrecking sex, they’re named South Beach’s hottest pairing. Until Brett’s stalker engineers a reputation-shattering reveal. She may be going down, but she’s not taking Will’s dreams with her. Now Will’s pulling out all his new skills and cooking up a last-ditch event. He’ll prove to Brett that relying on the right person makes for the perfect recipe—or be left heartbroken in the spotlight.

And now, here’s a little sneak peek to whet your appetites…!

Despite attempting to ghost his unwanted stylist, thanks to a vlogger who captured Will’s first disastrous public appearance, his time is up. If her client won’t come to her, Brett will go to her client—whether he likes it or not.

The host paused and replayed the choicest bits, the bungled date question while Will anointed the interviewer with sauce, and the teetering display rack fiasco.

He stopped and zoomed in on Will tangled in drop cords and resumed his critique. “The shop-worn advice to the modern chef is to exhibit big personalities and to make a splash. Be memorable.” Disdain dripped from the last word. “However, someone needs to explain to chef William Te’o, late of The Haberdashery, and the newest chef slash restaurateur, that this performance isn’t the sort of splash that advice advocates.”

The speaker took off wire-rimmed glasses, polishing them on a handkerchief and then replacing them, before resuming. “Te’o’s food was adequate during his Haberdashery tenure, but adequate is hardly the bar one sets for an executive chef.” He zoomed in on Will, his hair foofed out like a demented stuffed lion, a halo for his sweaty, scarlet face. “Let’s all agree this is hardly the mold for success, in skill or appearance. Here’s hoping his try at some sort of trite island-tiki eatery disappears under the waves quickly, sparing South Beach eaters.”

Her critiquing Will for his own good was one thing. Some stranger taking cheap potshots—unacceptable.

“Tara, look up our chef’s address and text it to me.” Brett’s morning plans had just changed.

Tasty stuff!  And not only do we get that exciting look at what’s inside the book, but there are some giveaway goodies too!

This giveaway is for US residents only.  Please enter using the Rafflecopter link below.  I am not responsible for despatch or delivery of the prize. 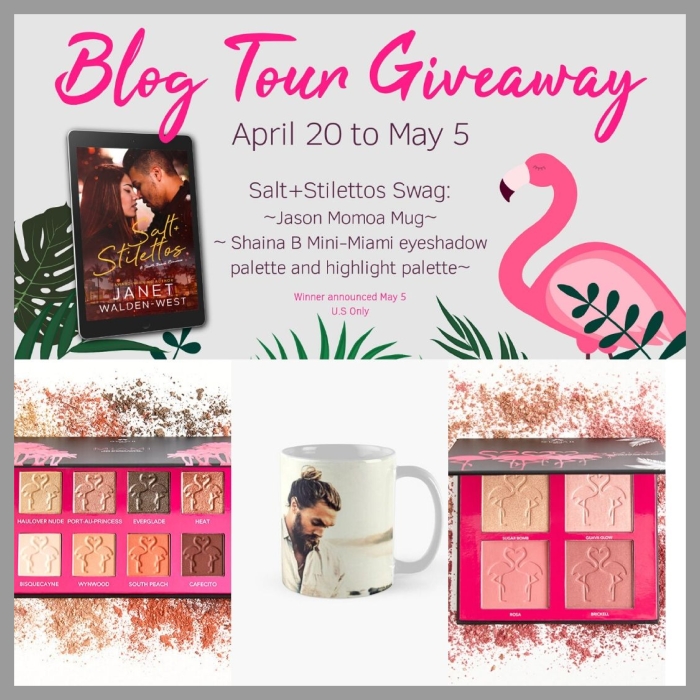 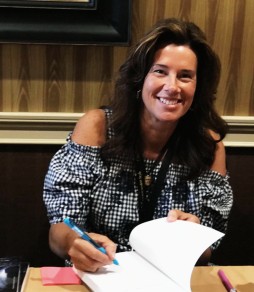 Janet Walden-West lives in the southeast with a pack of show dogs, a couple of kids, and a husband who didn’t read the fine print. A member of the East Tennessee Creative Writers Alliance, she is also a founding member of The Million Words craft blog. She pens diverse Urban Fantasy and inclusive Romantic Suspense and Contemporary Romance.

A 2X PitchWars alum, 2019 Pitch Wars Mentor, and Golden Heart® finalist, her debut multicultural Contemporary Romance, SALT+STILETTOS, is due out April 21st 2020 from City Owl Press. She is represented by Eva Scalzo of Speilburg Literary Agency. 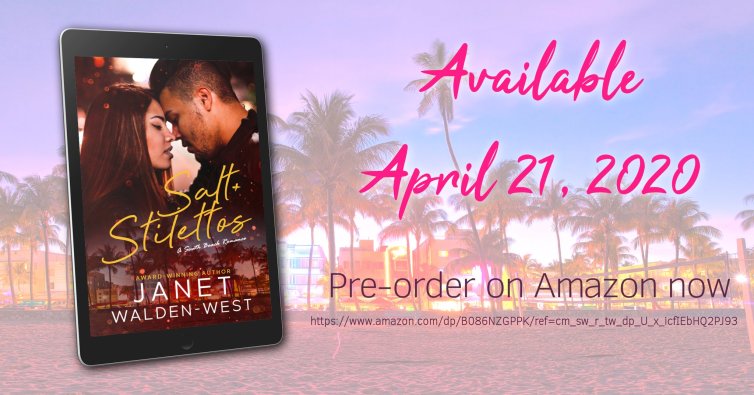