*I received a free copy of this book with thanks to the author.  The decision to review and my opinions are my own.*

Blurb:  They hid among us, until she exposed them. 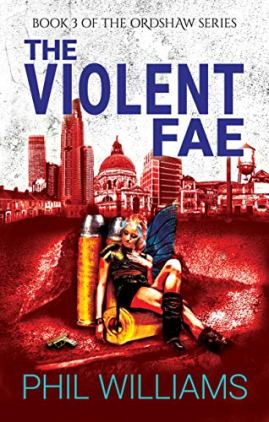 They’ll destroy everything to be hidden again.

Pax is discovering that the smallest mistakes can have the deadliest impact. To protect her city, she’s uncovered monstrous truths and involved terrible people. The consequences are coming for her.

The Sunken City is unstable. The Fae are armed for war.

Can Pax stop the coming disaster?

In this closing chapter of the Sunken City trilogy, Williams weaves the complex strands of Pax’s misadventure into a truly thrilling conclusion.

The Violent Fae is the explosive (literally) climax to the Ordshaw Sunken City trilogy – an urban fantasy action thriller series with some underlying horror.

I definitely recommend reading Under Ordshaw and Blue Angel first, in that order, as Phil Williams has created an entirely new world with its own monsters and rules, and the character development that occurs as the series unfolds is important to fully understanding this finale.

There was a little less horror and a lot more action in this instalment of the story.  All the familiar faces are back: Pax, Letty, the Bartons, Sam Ward and Cano Casaria, and my personal favourite side-character, the unflappable, ever-reliable Landon.  The war between the humans – specifically the MEE – and the fae has moved from threatening to happening, and it seems like Pax and Letty are the only ones standing between the total annihilation of one species or the other (well, the portion of those races that happens to live in Ordshaw anyway), and the destruction of Ordshaw’s fragile balance of magic and mundane once and for all.

Pax has the additional problem of dealing with the weird effects left on her body and mind by her previous encounters with the mysterious force of the praelucente, or minotaur, which has her senses tingling with every movement in the Sunken City below… a little distracting when you’re busy trying to work out what’s going on while frantically fending off fairies, officials and gangsters alike!

There are some very satisfying character arcs here, and plenty of characters that I would love to see come back for more monster mayhem and mystery solving.

If you enjoy survival video games, action films and urban fantasy books then you will be hooked on Ordshaw and its snarky, sweary, reluctant-hero inhabitants. For a taster, head to the author’s website and pick up his Ordshaw short story collection FREE* by signing up to his newsletter!

*As at time of writing 🙂

Pax watched them flying with birdlike grace, becoming dark shapes against the cloud.  How many times had people seen such sights, assuming delicate birds or big insects, when it was in fact a sweary little man with an attitude?  There was something to be said for how far she’d come, and all she’d learnt, no matter where she’d ended up.
Checking the road again, she had another thought.  How often did people survive learning these truths?  And as if on cue, something throbbed in her.

The Violent Fae is available on Amazon  right now!

For my reviews of Under Ordshaw and Blue Angel, check here and here, or to check out the Ordshaw Vignette blog tour, head here.