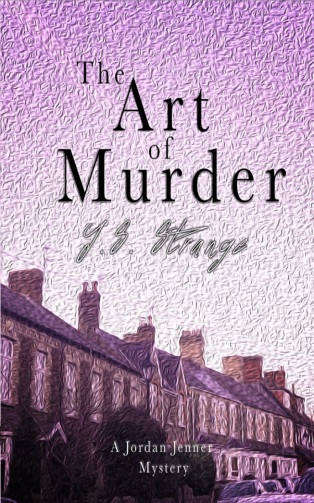 But when Xander is murdered, his body displayed as his final exhibit, Jordan realises the extent of the trouble Xander was in. Now, there are people following Jordan. They know his name, and they want him dead.

Meanwhile, Jordan’s brother Ashley has returned, and he has a secret. As time runs out to solve the murder of the famous artist, Jordan begins to fear his brother may be responsible.

A classic cosy mystery set in the heart of Cardiff.

A perfect read for fans of Agatha Christie.

A murdered artist. A brother with a deadly secret. A group intent on killing. The Art of Murder is the second in the Jordan Jenner Mysteries series, a cosy murder mystery set in Wales.

The Art of Murder is the second in the Jordan Jenner Mystery series, but you don’t need to have read Murder on the Rocks to be able to pick this one up running as the plot and characters stand fully alone.

Jordan finds himself embroiled in an art-world controversy as a rebellion against newly-established artists by a mysterious group called The Dirty Dollys turns threatening, then murderous.  While the police focus on the murder, Jordan tries to keep his head on the case he was hired to solve: uncovering the Dollys and taking them down.  It’s not that easy though, as all painted roads seem to lead back to poor dead Xander Draper and, more unsettling for Jordan, his own front door.

There is a really nice balance here between the personal and professional, as we follow Jordan’s struggles to open up, trust and let someone in to his emotional life, whilst simultaneously juggling a dangerous case.  While the last book dealt with his family history, this story features more family present, as his brother has ties to the art world through his job, but refuses to talk about anything – work-related or personal – leading Jordan to worry on just about every front.

The plot is twisty and well-paced, and had an ideal number of suspects – enough to be misleading, but not too many that it got confusing.  I had a few well-founded suspicions as I went along, but the climactic reveal still managed to surprise me.  Similarly, I found it fascinating that Jordan is clearly ready for a deeper relationship, and surrounded by a selection of eligible, attractive, interested men, yet I had no idea who (if any of them!) might turn into a long-term love interest and who was destined to remain a friend.  Would it be Lloyd, who he has history and chemistry with?  Mark, because they got off on the wrong foot initially and we’ve all seen how that goes?  Or hunky newcomer Tomas, who seems to be just what our hero needs, at just the time he’s ready to open up to it?  I’m just as invested in Jordan’s personal happiness as I am in the success of his investigations!

It’s the main character’s complexity, combined with the classic murder-mystery style plotting, which really draw you in to this series and keep you wanting more.  And Oscar the cat, of course, who puts in yet another adorable cameo appearance and reveals Jordan’s softer side.  I really enjoyed this more vulnerable Jordan and look forward to seeing what happens next for him.

Jordan cast a quick glance behind him.  The person was there, walking at a steady pace, sunglasses on even though the April weather outside was cloudy.  Jordan had spotted this man in Amsterdam.  He had been in every museum they had gone to.  At night, he had walked the red-light district, blending in with the crowds.  In restaurants, he had been only a table or two away from theirs.
Now, he had been on their flight.  He’d sat at the front of the plane, twisting in his seat to look at Jordan.
Jordan had to get out.

The Art of Murder is available on Amazon right now, and you can find my review of Murder on the Rocks (Jordan Jenner #1) here.

Please don’t forget to check out the other stops on the blog tour (details on the poster below) for more great reviews and content!