*I received a free ARC of this book, with thanks to the author and Tiny Fox Press. The decision to review and my opinions are my own.*

Blurb:  “IT IS STAN,” screamed the unhinged monk. “STAN HAS COME AMONGST US!”
“Stan?” cried the abbot and I in bewilderment. “Who is Stan?”

I realized my mistake, and retyped the line. 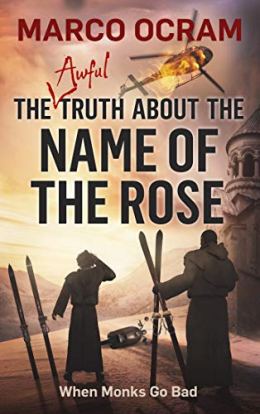 “IT IS SATAN,” screamed the unhinged monk. “SATAN HAS COME AMONST US!”

Mega-selling author, Marco Ocram, is on the edge of a nervous breakdown, and needs complete rest.

Police Chief Como Galahad—Marco’s main character—needs a volunteer to go under-cover at the Abbey, a remote celebrity retreat run as a medieval monastery, where something fishy is afoot.

There’s only one solution—Marco books into the Abbey for a detox, just a few days before a hundred A-listers fly in for a grand gala dinner.

Could anything go wrong? Could Marco write a labyrinth of astounding twists to leave all the world’s top celebrities moments from an awful death? Will you be amazed by the ending? You bet!

Fast, funny, and utterly different. Welcome to the weird world of The Awful Truth.

Much the same as I did for its predecessor, I spent the majority of my time reading The Awful Truth About the Name of the Rose guffawing, highlighting large chunks on my Kindle, and reading out random segments to my bemused other half whilst guffawing, rendering the prose rather less intelligible than Marco’s logic.

You don’t need to have read the first book to enjoy this – although you really should read it anyway just for fun! – as TATATNOTR stands perfectly well alone.  We are reintroduced to terrible writer and inveterate ‘pantser’, Marco, and his long-suffering detective hero Como as they plunge into another ridiculous murder investigation with no plan and a proliferation of clues.

The author expertly blends mystery, parody and a heaping of meta-references, taking the reader on a riotous rollercoaster of monks, mobsters and mayhem.  There is very little logic, by the authorial main character’s own admission, and yet somehow the plot still unrolls despite his best efforts and sense is made from nonsense.  It helps that, unlike Marco, his alter ego (Denis Shaughnessy) IS a talented writer and noted wit (without a preceding ‘t’).

In case it’s not utterly clear, this series is unique, irreverent and totally wonderful; a joy to read.  I look forward to Marco’s next foray into the Awful Truth!

I was going to start the chapter with the words I froze, but it seemed such a stupid thing to say standing knee deep in snow wearing nothing but a wet horsehair shirt.  Besides, I only froze for a moment, after which I started banging my head against the wall of the shed.  Why did I keep writing myself into these embarrassing predicaments?  Well, it was too late for second thoughts—or even first ones—I’d just have to make the most of it.

– Marco Ocram, The Awful Truth About the Name of the Rose