*I received a free copy of this ebook, with thanks to the author.  The decision to review and my opinions are my own.*

“We all need someplace to escape, and sometimes the mind is just as good of a place as any.”

A trailer park Alice. A hole that traps souls. The white rabbit’s a tricky hare. And the world is upside down. This fairy tale just got twisty . . . 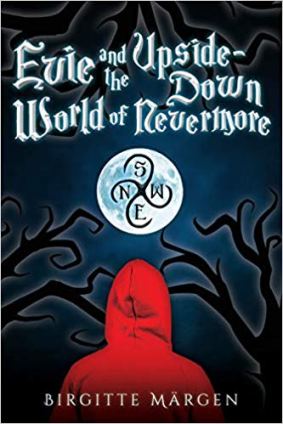 Rule One: Don’t eat or drink.
Rule Two: Never, ever tell anyone your name.
If ya do – your soul will be lost there forever.

How do I know? I been there myself. This is my story.

There was a full moon brimmin’ that night, and that meant strange things could happen. As I walked through the woods, I reckon I shoulda known by the way my hair stood up on end like Uncle Red’s toupee –that I shoulda coulda stayed home. I call it the willies, but grandpappy calls it premonition. One thing I can tell ya as a girl from the wrong side of the tracks: If you’re fix’n to wander way over yonder –it’s important to know the right direction.

What direction ya ask? Well, ya have to read the story to find that one out.

AFTER FALLING INTO a dark hole when she was running through the forest, Evie finds herself trapped in a strange new world that mirrors our own. Her only guide is a compass stick given to her by an angry gnome who lives in an ancient knobby tree. As she travels through the lands of this upside-down world she happens upon creatures that are twisted versions of fairytale folklore. A place where fairies bite, unicorns charge, mermaids are menacing, and nightmares are more than dreams. A world where the souls of those who could not follow the unspoken rules are trapped forever.

As a southern girl born on the wrong side of the tracks, Evie relies on the wisdom passed down by her grandpappy and the haunting memories of her mama to teach her perseverance of the soul. She learns that things are rarely what they seem as her world is turned upside down.

It took me a little while to get the hang of Evie as a main character, due to the story being told from her first person viewpoint, using her own natural speech patterns and colloquialisms.

Once I settled into Evie’s narration I found myself intrigued and invested in her progression through the strange world of Nevermore and was unable to put the book down until I knew how it would all end!

There were times when the story read like an allegory of personal growth, with events in Nevermore representing stylised versions of the emotional battles Evie faced in the real world with her family life and friendship conflicts.  At other times her journey felt dreamlike and surreal, with events appearing unconnected and meaningless – just things happening one after another, in a slow, fluid succession.  This may be down to Evie’s own flawed interpretations of some aspects of her own adventure, or perhaps the strange nature of the Upside-Dow world itself, or maybe it is related to the severe head injury Evie received when she fell and there was never a hedgehog-hole at all…?  The interpretation of events is very much up to the individual reader, and I found myself changing my mind more than once as I went along.

More than anything, it is the worldbuilding that carries the story here.  Small touches like the behaviour of Evie’s hair, or the personal objects she finds along the way, add such realism and depth of emotion to the story that the reader is irresistibly haunted by the horror, touched by the grief and amused by the feisty spirit of the young hero.

Despite the slightly uneven plot pacing (slow dreamlike segments interspersed with bursts of action), this is a great and unique dark fantasy fairytale for teens upward.

Grandpappy told me that my name meant “life”.  He said that when I was born, they took the best part of my mama and daddy and rolled it into one ball of joy.  I always wished that when I saw mama so sad, I could give her part back.  Maybe I took too much of her joy, and she didn’t have enough left.

– Birgitte Märgen, Evie and the Upside-Down World of Nevermore

You can follow Birgitte Märgen on Goodreads and Twitter, and Evie and the Upside-Down World of Nevermore is available on Amazon right now!