Blurb:  How far would you go to save strangers in need? And who really are Marines’ most trusted allies? 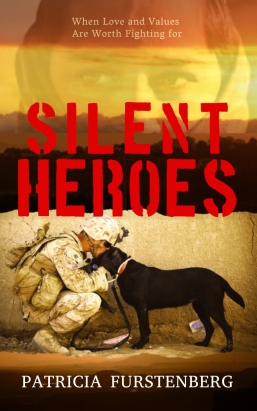 Military Dogs would risk their lives for their humans in a heartbeat, but can soldiers do the same when personal struggles and global affairs defy humanity?

An educated woman is prepared for the ultimate sacrifice in order to teach reading to the girls in her community. She leaves behind a daughter and a son whose lives become intertwined with those of the U.S. Marines serving at Military Base nearby. But the Taliban is infiltrated everywhere and is hard to differentiate between friend and foe. The U.S. Marines fight with bravery to protect the civilians of Nauzad and to fend off the Taliban at Qala-e-Bost, thus protecting Bost Airport, a vital strategic point for the allies. One thing is certain; the Marines can rely on their Military Working Dogs. A race against time follows in one last battle of eradicating the Taliban and saving civilian lives before it is too late.

Silent Heroes takes the reader on an intimate military tour of Afghanistan, following the lives (and occasionally deaths) of the brave men and women – and animals – involved.

Patricia Furstenberg doesn’t just show the perspective of the U.S. military personnel involved in the war, she also looks at the views of the local citizens and the challenges they face from all sides; the Taliban and other local militias and their beliefs; and the local resistance to the extremists, who are willing to side with the U.S. troops if it might bring peace to their beloved homeland.

These are not easy, clear situations.  The author has clearly researched the conflict thoroughly, along with all of the military practices and equipment, but she also presents a wealth of detailed information about the history of Afghanistan, its culture and the politics of the area and people.  It becomes increasingly clear as you read that there is no ‘right side’ in such a disastrous situation, but only lesser evils and the hope for education bringing about a gradual, lasting change for the better.  I don’t think I have read another war novel that captures the necessary evil of war quite as coherently.

The main focus throughout the story, however, is the human element.  Patricia Furstenberg has a real love for animals (as seen in her previous work) and this has carried through to this war novel.  We see the deep love and respect on both sides between the IED detection dogs and their handlers – there are some very touching moments, some even glimpsed from the canine point of view.  We also see the comradeship and loyalty that builds between men and women who daily lay their lives on the line for their country and for each other.

This is not a neatly-wrapped story with a clear beginning and end – much like the conflict portrayed within its pages.  Instead this is a series of linked immersions into the struggles faced by human individuals facing war, death and violence.  It is a story of respect for the courage shown, understanding for the decisions made, and, ultimately, hope for the possibility of a peaceful resolution through and beyond the guns and bombs.  Thought-provoking is an understatement in current circumstances.

“Sometimes it isn’t the size of the dream we dream, but its size when it will be achieved that keeps us moving on.  I remember how the peasant king looked at the trees bordering their garden.  With such pride that for a moment they looked strong enough to support the heavens above.  Then he looked at the sky voided of clouds and he said: ‘We don’t want you here.  Your people, all the people who don’t speak our language.  This is our land.  But don’t you leave us now, don’t you dare.  You stay right here and do what you do,’ and he went on speaking to me, but not looking me in the eye, but rather through me, like he was addressing all of us.  ‘I wish,’ he whispered and we had to draw nearer to hear his voice for it was like a prayer now, a prayer between him and God, or Allah.  ‘I wish my government would do for us what you and your army does for us.  But they don’t.  So you stay.’

Silent Heroes is available on Amazon right now!  Check here for my review of Patricia’s poetry collection, As Good As Gold.