*I received a free copy of this book via Voracious Readers Only and with thanks to the author. The decision to review and my opinions are my own.*

Blurb:  Michael Duckett is fed up with his life. His job is a drag, and his roommate and best friend of fifteen years, Stephanie Dyer, is only making him more anxious with her lazy irresponsibility. 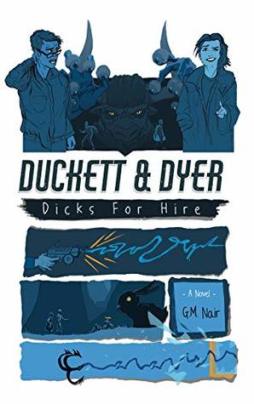 Things continue to escalate when they face the threat of imminent eviction from their palatial 5th floor walk-up and find that someone has been plastering ads all over the city for their Detective Agency.

The only problem is: He and Stephanie don’t have one of those.

Despite their baffling levels of incompetence, Stephanie eagerly pursues this crazy scheme and drags Michael, kicking and screaming, into the fray only to find that they are way out of their depth. They stumble upon a web of missing people that are curiously linked to a sexually audacious theoretical physicist and his experiments with the fabric of space-time. And unless Michael and Stephanie can put their personal issues aside and fix the multi-verse, the concept of existence itself may, ironically, no longer exist.

This is a riotous, witty sci-fi mystery for fans of the surreal and outrageous.  And yet there’s more to it than that.

On the surface of Duckett & Dyer you get a romp through time, space and parallel universes as uptight Michael Duckett attempts to unwillingly solve the mystery of why various locals are suddenly going missing, whilst somehow staying out of the police’s bad books and still managing to pay his rent on time.  He is thwarted at every turn by his best friend, roommate and antithesis, Stephanie Dyer – irresponsible wild child who lives on adrenaline and instinct, and (apparently) pissing Michael off.

So far, so odd-buddy-cop movie.  Mike and Stephanie careen around, merrily – or unhappily, in Mike’s case – ripping through the laws of physics and causality and severely annoying the actual investigating officer, Calhoun.  The plot is equal parts confusing, ridiculous and compelling as the two friends bicker and snipe through various parallel universes, in a very Douglas Adams style.

There is a deeper story underpinning the surreal antics however; a story about friendship, and loyalty, and the two-sides to every story.  It is this ‘heart’ of the book that stayed with me, long after I had finished laughing at the zany and lost track of any logic.

I would recommend this book to anyone prepared to sit back and enjoy a wild ride, without worrying too much about clinging to any kind of sense.  There is little to understand, but a whole lot to enjoy!

After gathering some supplies—a notebook and pen between them, which they ultimately would end up leaving in the car—the two potential gumshoes walked out to the Garbagemobile.  Stephanie held the laptop—their font of information aloft while Michael disengaged the brick parking system and leapt into the driver’s seat to prevent the car from rolling away.  Stephanie tossed the laptop through the passenger-side window and then crawled in behind it, urging Michael to get going when she was halfway through.  As usual, the car refused to turn over, emitting squeals resembling a dying wildebeest.  When it did give in, it handled with the precision of the very same wildebeest, with a pair of women’s jeans dangling out the side window.