Blurb:  Intrepid investigators Holmes and Watson continue their fight against crime in a not quite Post-Victorian, steampunk parallel universe. 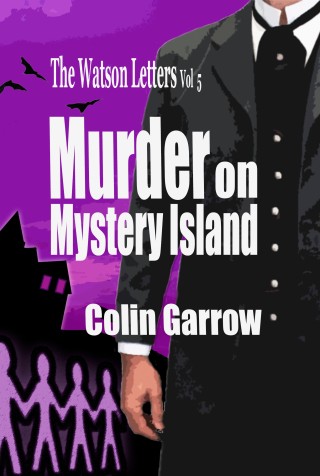 When consumptive Doctor Edward Armstrong turns up at Baker Street with an invitation to visit a mysterious island, Sherlock Holmes smells a rat. Sounding deviously similar to the plot of a recent novel by celebrated lady author Mrs Christie, Holmes decides to send his inveterate side-kick Watson to the island, along with the Doctor’s lovely, but wonky-eyed wife, Mary, and a well-known Scotland Yard detective. Taking Armstrong’s place, the team determine to find out exactly what’s going on, but before they’ve even left the mainland, one of the guests is murdered.

‘The Watson Letters – Volume 5: Murder on Mystery Island’ is book #5 in this Victorian comedy adventure series.

If you love historical mysteries, buy something else instead, but if you’re into murder, fart-gags and innuendo, this’ll be right up your Victorian street.

Murder on Mystery Island is fantastical, fast-paced mystery fun for fans of Conan Doyle, Christie and similar golden-age classics.  In fact, the illustrious dame of crime makes a cameo, playing herself!

The story is told through journal entries by Dr Watson and his wife, Mary, with occasional excerpts from Holmes and Lestrade, to give multiple perspectives on the case.  The plot begins with the classic visit to Holmes and Watson to engage them on a case, with a little of his trademark deductive reasoning (although he appears to have restrained himself from his usual showing-off for Watson’s benefit).

We then segue seamlessly into one of Agatha Christie’s most famous plots, And Then There Were None, as Watson and Mary join a group of assorted ‘innocents’, lured to a remote island for nefarious and murderous purposes.  The characters here are aware of the similarities and refer to the original text quite frequently, but readers needn’t worry… it doesn’t take long to realise that the solution is going to be very different!

Obviously those who are familiar with the canon of Conan Doyle and the works of Christie, especially the specific text in question, will get the most value from this book.  It is packed with references, in-jokes and allusions which will gladden the heart of the knowing.  However, the book can certainly be read completely apart from those source texts too, as all of the necessary information is right here in the text.

The murders are multiple and occur in quick succession, and there is never a dull moment, as the ‘quieter’ sections are packed with clues, banter, bad language and some shockingly sexual shenanigans; bringing the tone forward from gentle cosy mystery, to a more modern milieu (aided by references to Neo-Victorian, steampunk-esque technology).

Altogether, this is a very clever and witty read: I found it impossible to put down, and had to read it in one (breakneck, breathless) sitting. Not for anyone who takes their mysteries too seriously – as the ending is frankly Leslie-Nielsen-spoof ridiculous – but perfect for fans looking for something quick, light and funny.

I gazed out of the window at the long gardens and allotments whizzing past in the fading afternoon light.  ‘I hope the hotel’s nice.’
‘In any case,’ said Mary, avoiding my attempt to change the course of the conversation, ‘We’re not taking part in a book, are we?  This is real, with real people and a real murderer.’
‘We don’t know for sure it isn’t some ghastly joke.’
‘Yes, darling, we do.  No-one in their right mind would go to all this trouble to play a trick on a bunch of strangers.’
‘No, I suppose you’re right.’  I returned to my book with a view to finding out how my particular character meets his end and was a little disturbed to discover, a short while later, that Armstrong’s body washes up on the beach, having initially been suspected as the killer.

Murder on Mystery Island is available on Amazon right now.