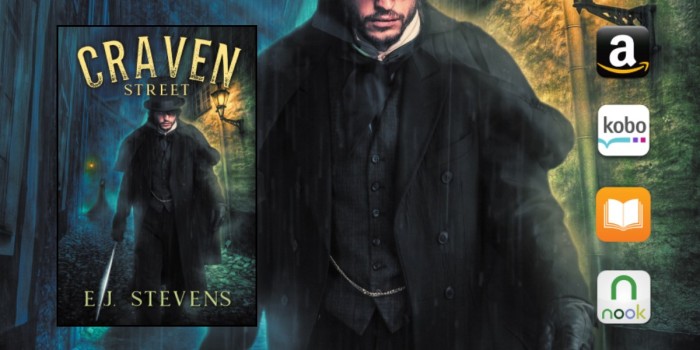 *I received a free copy of this book, with thanks to the author, Sacred Oaks Press and NetGalley. The decision to review and my opinions are my own.*

The discovery of bricked up skeletal remains at 36 Craven Street point to something more diabolical than an illegal anatomy school. The tool marks on the bones, arcane sigils of great power, indicate more than mere butchery, more than enlightened experimentation. The signs, omens, and portents support the crown’s greatest fears. A great evil is being unleashed upon the gaslit streets of London, a blood-drenched shadow reaching skeletal fingers beyond the slums of Whitechapel.

We must stamp out this demonic plague for the sake of our Queen, our Country, and our immortal souls. – Cora Drummond, Whitechapel Paranormal Society

Collecting human souls is a thankless job, nearly as tedious as acting as solicitor to the fae. But when the demon Forneus enters an opium den searching for men eager to trade their souls for the ill-smelling weed, he stumbles on a plot so devious, so heinous, he’s jealous that he hadn’t thought of it himself.

There’s nothing like a maniacal plot to unleash Hell on earth to break the boredom of immortality. – Forneus, Grand Marquis of Hell

Five seemingly ordinary women with minor psychic gifts and an exceptional ability to solve supernatural crimes, skills honed during their service with the Special Paranormal Research Branch a secret security agency tasked with protecting Queen and country from inhuman forces, must now use their singular expertise to unravel a dreadful string of brutal murders.

Much maligned by their male counterparts within the S.P.R.B., the women of the Whitechapel Paranormal Society are on their own to face a sinister dark mastermind as dismembered bodies are set across London’s East End like figures on a game board.

Can they predict the killer’s next move–a bloody, ritualistic murder that might tip the scales and give demons dominion over all of London–before he strikes again?

Set against the backdrop of pre and post-Ripper Victorian London, Whitechapel Paranormal Society series answers the question of how cases such as the Thames Torso Murders, Craven Street Bones, Tottenham Court Road Mystery, Whitechapel Murders, Goswell Road Mystery, and the Vanishing Girls of West Ham might have been solved if put in the capable hands of a team of female special agents.

Craven Street is a novella set in an alternative Victorian London where demons and black magic abound and just a few stalwart women have the knowledge, experience and skills to protect the public from the darker side.  These women are the Whitechapel Paranormal Society: psychics and fortune tellers to the public; criminal investigators and baddie vanquishers behind the scenes.

This novella gives the reader a short glimpse into the work and relationships within the agency, and also reintroduces an old ‘friend’, in the form of Forneus – demon with moral standards, just not the same ones as humans.

It feels like a lot of plot is packed into just a few pages here, as the brutal serial killings, demon possessions and mysterious mutilating marks all hold enough intrigue to carry a full novel!  I felt a bit breathless by the end, having been whisked from crime scene to confrontation with the instantly-appealing Cora and co.

As a stand-alone novella I think that this runs just a little too quickly for me to really settle into the characters and plotline.  As a teaser for the main series though, I think it works perfectly!

“I don’t say this to hurt you, Cora, only to relay the facts,” she said.  “Either her power transferred to you, a parting gift perhaps, or the trauma of her loss triggered the change in you.  Whatever the reason, the spirits of the dead have found you.”
“And I can see them,” I said.
“So it would seem,” she said.
“Bugger.”