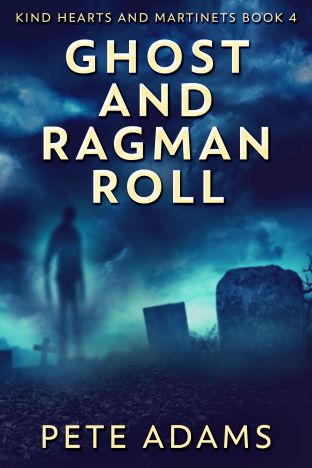 Blurb:  His French honeymoon continually interrupted by a series of misdeeds, DCI Jack Austin returns to Portsmouth to find the missing link.

When an ambitious new detective infringes on his territory – and his ego – Austin resorts to illogically effective tactics to protect those that matter most.

With a corpulent gangster gone missing and a banker murdered in Paris, can Austin reveal the perpetrator and bring him to justice?

First things first: ‘Ragman roll’ is an obsolete term for records of royal allegiance, but has taken on the colloquial meaning ‘rigmarole’.  Which cleverly mimics our very own Mr Malacopperism, Jack ‘Jane’ Austin’s way of speaking in obscure references and slightly wrong words.  Are you not diverted?

Yes, Jane and his merry crew of spooks and misfits are back to solve more high-level political crime, whilst masquerading as childish, clueless buffoons.  (Did I…?  Yes!)

This is the fourth book in the Kind Hearts and Martinets series, and the first one which I have felt could truly stand alone if necessary.  Pete Adams slips explanations and definitions in with the action of the first few chapters, catching the reader up nicely without slowing the pace.  I would still recommend reading them all in order, but that’s because a) they are worth it and b) I have ‘order’ issues!

I found the pace of this book slightly less manic, and the plot less chaotic, than the previous books in the series, perhaps reflecting Jack’s more settled home life, or that his mental health issues that are being brought to the surface and dealt with as the series progresses.  His thinking, however, is as delightfully disordered as ever so the reader can still buckle up to enjoy the dinlo ride.  Plus this time it’s double trouble, as we meet the lovely Della and everyone learns – to their horror and amusement – that they may have forgotten to break Jack’s mould.  Jo Jums, for one, is just thrilled to realise she know has two of them to deal with!

There are the usual bizarre and slapstick shenanigans – this time featuring Northern pigeons, Cockney sparrows and rather a lot of friendly fire.  There is some love (generally represented in the typical British style by a lot of taking the piss), some violence, and enough political morality to make the point without hammering it in.

This series is a breath of fresh air, Jane Austin is a national treasure, and Mandy is definitely a saint.  I am looking forward to seeing what the big eejit blunders wildly into next.

Jack whispered to Mandy the bloke needed the space, as he reckoned it was the Fat Controller out of Thomas the Tank Engine, minus the top hat; although Jack thought he looked a right top hat.
Mandy smiled politely at Jack’s cockney rhyming slang, suggested he was not a pratt, as the man commanded the floor for a speech.  She whispered quickly, ‘He’s the Mayor, the red, white and blue sash around his belly is the giveaway bit, dinlo,’ and she shushed his anticipated retort, which he resented as he hadn’t even thought of one.

Ghost and Ragman Roll is available on Amazon right now!

You can also pop back to me on 26th October when I will be reviewing the next book in the Kind Hearts and Martinets series, Merde and Mandarins, and check back to find my thoughts on Book 1, Cause and Effect; Book 2, Irony in the Soul and Book 3, A Barrow Boy’s Cadenza.