Blurb:  How would you feel if you got caught up in a secret so vast it threatened everything the world had come to believe?

That is, until the dreams started…

From the idyllic calm of Cambridge, John Milburn is drawn to the dust and the heat of Jericho. Thrown into danger and intrigue, he discovers more than he’d bargained for.

Children of Sinai is an intriguing mix of religion, sci-fi and apocalyptic thriller.

The main character, John, is pretty much Mr Ordinary except for the recurring dreams he has of climbing a mountain, which leave him drained and exhausted upon waking.  His twin girls have their own language, which his wife – frustrated that childcare has interrupted her meteoric career in linguistics – is studying as a private project.

A sudden death, however, brings to light old paperwork which sheds more light on the death of John’s parents, and it turns out that not only was their archaeological work worth killing for, but it still is… and John has the evidence right there, in his family home, with his wife and children.

The unfolding of these events is done at a very slow pace, gradually layering in the clues and tension.  Once John embarks on his journey to Israel in search of the truth about his history, this triggers a chain of events that picks up the pace, resulting in attacks, abductions and eventually, possibly, the apocalypse.  The author uses the initial slow-burn to lay out a plausible-to-the-layperson groundwork for ‘enlightened powers’ and religious apocalypse, using the science of genetics and mutations to give the story an additional sci-fi feel.

There is a strong religious theme to the whole story, with the re-imagining of the Moses story, Nephilim and evolution vs creation.  The story doesn’t favour one religion over another however, suggesting that all organised religions carry elements of truth (distorted over time and tradition) and that there may be a way to unite all of the theories and beliefs peacefully.  The real enemies here are the capitalists, for whom world peace means a drop in income, and war/division means profit.  So a very timely story too!

Timely in more ways than one, as John slowly comes to realise that his children (and others) know more about events than they should and that they are the path to a better, brighter future for humanity.  Anyone else thinking of Greta Thunberg at this point?!

Children of Sinai is a thoughtful story that carries strong spiritual and religious messages.  There is plenty of anxiety and action towards the middle and end of the book, followed by tentative hope for the future.

If the sleeping mind was supposed to create dreams to sort out information that hadn’t been resolved, or organized, during waking hours, why was he dreaming of climbing?  And not just any mountain, but that same one?  The same details, same strange words echoing in his head?  Neither mountain nor words meant anything at all.

Children of Sinai is available on Amazon right now! 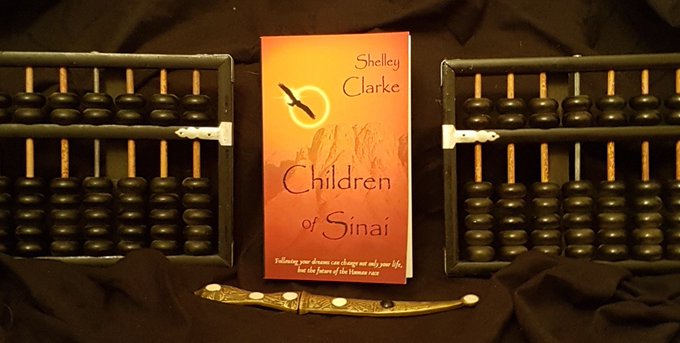