44-year-old geophysicist, Michael Lewis has a boring, mundane life, with one exception: He can see horrifying visions of disturbing future disasters through a kaleidoscope in broken, fragmented pieces.

After spending fifteen years denying his gift of visions, he can no longer deny that he is anything but normal. While home after his latest assignment, he decides to confide in Nelson, a psychiatrist friend, about his horrifying visions. Nelson recommends that he keep a journal and convinces Mike to let him teach him how to observe the visions instead of being part of them, allowing the pair to explore the visions.

After inadvertently discovering that someone has bugged his home and has apparently been watching him for years, Mike decides it’s time to fight back.

The Vision Chronicles nine-book thriller series is a slice-of-life metaphysical/visionary story that details Mike’s changing ability as he protects himself, his family, and his friends from those who doggedly pursue him. It begins with Kaleidoscope and ends with Clear Glass and should be read in order. Or you can read the entire 9-book saga in one download in The Vision Chronicles Complete.

If you love mind-boggling suspense with a dash of paranormal and a touch of romance, this is the series for you.

Kaleidoscope is a paranormal thriller with the premise that the main character, Mike, has psychic powers that have been stifled and are now coming to the forefront, and as a result drawing the attention of some dubious and dangerous characters.

The focus for Mike is on who to trust and how best to deal with his visions of disastrous events, but for the reader (who can more clearly see the people surrounding him) the story is one of Mike’s personal journey as he learns to unlock and develop his abilities and skills, becoming almost a superhero in the process.

It is clear that as this series progresses, Mike’s powers will continue to grow in interesting ways, and I am fascinated to see what he is able to make of them in the future… whether he can actually find a way to use them for good, and whether he can evade those who want to use him for evil.

I found some of the dialogue unnatural and stilted, but the action and intrigue carried through this and it didn’t hinder the flow of the narrative.  I particularly enjoyed the progress of Mike’s physical prowess and fighting skills, and the visualisation techniques that this involved.

I would recommend this story to anyone who enjoys a character driven action thriller, based around paranormal abilities.  It is a fairly slow-burner, but a bright one!

“Every time I close my eyes, I see a vision of some future event in a kaleidoscope.  It’s not the kaleidoscope of childhood filled with pretty-coloured glass.  It crackles and sparkles like the one I had as a kid, but this one shows broken images of terrifying future events.  The visions torment me.  They’re reflections and fragmented, not clear pictures.  It uses the same principle as all kaleidoscopes where reflective surfaces are placed at an angle to one another.” 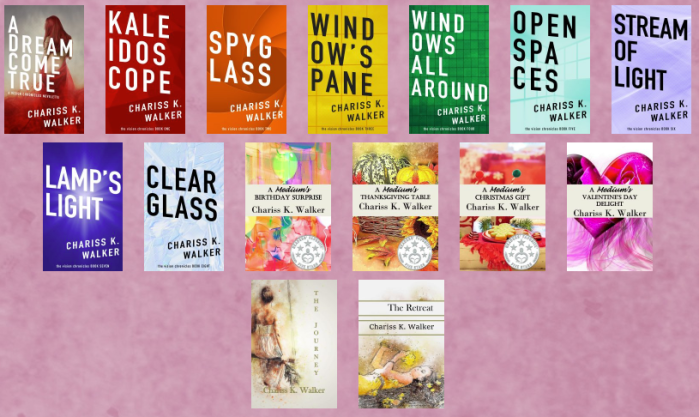