I have a treat for you today! It is the release date for Catherine Curzon and Eleanor Harkstead’s new novel The Captain and the Theatrical and I am honoured to be hosting a guest post from Eleanor, telling us a bit about their romantic Captivating Captains series.

When Captain Pendleton needs an emergency fiancée, who better to turn to than his male best friend? After all, for Amadeo Orsini, life’s one long, happy drag! 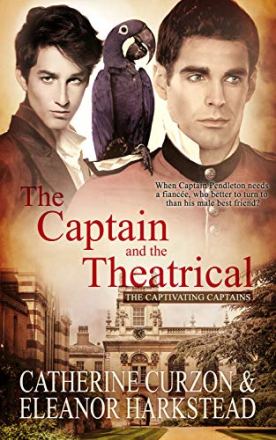 Captain Ambrose “Pen” Pendleton might have distinguished himself on the battlefield at Waterloo but since he’s come home to civvy street, he’s struggled to make his mark.

Pen dreams of becoming a playwright but his ambitious father has other ideas, including a trophy wife and a new job in America. If he’s to stand a hope of staying in England and pursuing his dream, Pen needs to find a fiancée fast.

Amadeo Orsini never made it as a leading man, but as a leading lady he’s the toast of the continental stage. Now Cosima is about to face her most challenging role yet, that of Captain Pendleton’s secret amour.

With the help of a talking theatrical parrot who never forgets his lines, Orsini throws on his best frock, slaps on the rouge and sets out to save Pen from the clutches of Miss Harriet Tarbottom and her scheming parents.

As friendship turns into love, will the captain be able to write a happy ending for himself and Orsini before the curtain falls?

Now here is Eleanor to tell you more about her series of dashing captains, and the process of writing them with co-author Catherine Curzon…

The Captain and the Theatrical, the third novel in the Captivating Captains series, is out today. It’s a Recency m/m romcom starring a Waterloo hero and his cross-dressing actor friend. 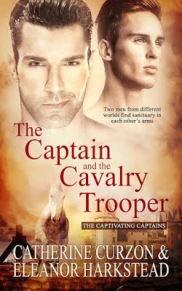 The Captivating Captains series sprang into life when Catherine and I finished writing our first joint novel, WW1 romance The Captain and the Cavalry Trooper. We started to think about how to turn the “captain” idea into a series, initially thinking we could extend the stories of the novel’s characters into peacetime.

One Skype session later, although we had come up with an outline for a sequel to our first novel, we also had a huge list of ideas for novels about other captains entirely.

Usually a series follows the same characters, in the same world, through new adventures. The obvious example is crime fiction, where you see Maigret or Holmes solve a new case in each outing. With romance, it’s trickier because everything should be resolved and a happy ever after promised at the end.

Subsequent novels in a romance series will often involve supporting characters from earlier instalments, who finally get to have their happy endings, while the protagonists from earlier stories in their turn take supporting roles. And sometimes the series will revolve around a particular location — a village, a street, a workplace — which itself becomes a character. 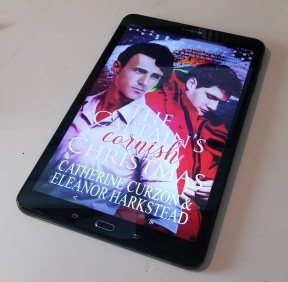 But the Captivating Captains series doesn’t follow those conventions. In each novel, you meet a new captain in a new setting, and maybe even a new time period and genre. While the captains of the first three novels are all army captains, either active or retired, the fourth in the series will be an airline captain. The short stories we’ve written include a lifeboat captain and the captain of an Olympic team.

So what unites the series is a concept — and perhaps a question. What is it about a dashing captain that makes him a perfect romantic hero? For Catherine and me at least!

A Georgian-set captain novel was on our list from early on. After all, it’s Catherine’s specialist historical area, and because there’s something about Napoleonic War era uniforms, all those smart red coats, braid and gold buttons.

The main kernel of the plot was there early on — Captain Ambrose Pendleton is being encouraged into a marriage by his parents, and his male best friend Amadeo, who happens to have a highly successful stage career as a woman, comes to his aid. So often it’s women in historicals having an arranged marriage but we wanted to explore the idea of an unenthusiastic groom. Indeed, Ambrose is particularly unenthusiastic because he’s gay. Although a marriage might disguise his sexuality, Ambrose prefers to remain a bachelor, yet he’s also a dutiful son who doesn’t want to disappoint his parents.

So we had a good starting off point, but the writing proved more difficult than we expected. We had two false starts, struggling to find enough conflict to fuel a novel-length story. Without adequate conflict you’ve got characters happily pootling about and not much else, which doesn’t equal a page-turner (“OMG, they’re eating scones and discussing the weather! And someone’s at the door — are they bringing news that equals conflict? Oh, no, it’s just someone bringing more scones.”). 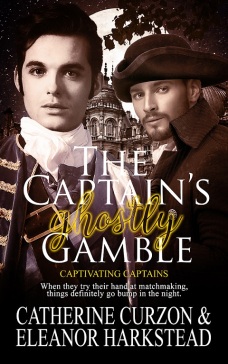 So in attempt number three, we came up with a subplot. Unfortunately, we loved the subplot and the characters it involved so much that they took over Ambrose and Amadeo’s story. It made for a disjointed read. So we were faced with making attempt number four.

There’s always a worry that by going over the same idea again and again, you risk trampling on a story’s freshness — you know the characters, and you don’t do a good job helping the readers get to know them. You might even feel frustrated by a concept you’ve struggled with and that could come across to readers. No one wants to read a book that even its own author resents.

But by attempt number four, we took out the distracting subplot and gave Ambrose and Amadeo a new challenge and foes to defeat. There was no risk now of their adventures being stale. And yes, we knew them very well, but we were very fond of them rather than bored of them, so we were really keen to get their story to work. And the subplot and its characters aren’t in the bin. They’ll appear in their own novel one day.

While it would be nice to pretend that writing is easy, it’s worth talking about how — sometimes — it isn’t. If you’re a reader, you might be curious about the process that turns an idea in someone’s head into words in a finished book. And if you’re a writer struggling with the nth incarnation of a story and you’re wondering if it’s time to throw in the towel, then I hope you’ll take courage knowing that The Captain and the Theatrical took four goes until we finally grasped it.

Stay strong — don’t give up! And that’s what the captains would say too.

Thank you so much, Eleanor, for this insight into your writing process.

This book sounds just as sweet and swoonworthy as the other dashing captain romances by these authors, and I am so excited to be able to bring you all my thoughts soon!

Check out my other reviews of the Captivating Captain series on the following links!

The Captain and the Cavalry Trooper – Catherine Curzon & Eleanor Harkstead

The Captain and the Cricketer – Catherine Curzon & Eleanor Harkstead