Blurb:   A self-labelled enigma, Detective Inspector Jack Austin is at once miserable and amusing, melancholy and motivated. Running the Community Police Unit from his deck chair, D.I. Austin is known for his ability to solve crimes out of the blue.

Trying to work cases while struggling with his mental issues, Austin deals with a variety of major crimes, including bicycle theft. But when the case of an executed police officer lands on his desk, he accidentally uncovers a malevolent scheme.

Can he discover who is behind it all – and keep what’s left of his sanity?

Top tip here is to persevere, because this is a cracker of a book, but I spent the first few chapters wondering what the Mary Poppins I was reading!

Things you need to know about the main character, DI Jack ‘Jane’ Austin:

The result of all of these stylistic quirks happening simultaneously is utter gibberish.  At first.

Once you have deciphered ‘the code’, you are suddenly an insider – one of the team – and all of a sudden the story snaps into proper focus.  And what a story it is!

Packed with action, affection and amusement, with some genuinely touching moments and plenty of eye-rolling, the plot takes us from nicking Bombay (Mumbai) Mix and bikes locally, to abused children and a major crime ring, and finally an evil mastermind at work behind the scenes: the dreaded Norafarty… or something like that.

Again, at first, I fretted about the rampant sexism, racism, ageism, ableism, heterosexism, and so on and so on ad infinitum.  Until, again, the obvious point finally dawned on me.  Jane is equally obnoxious about everyone and everything.  Equally.  Also, his words don’t match his actions.  He actually cares about everyone and everything and almost all of his clownish antics are aimed at helping, protecting and cheering people up.  Also, he doesn’t miss a trick and likes to hide his perceptive intelligence under a veneer of buffoonery and oafishness.

So that’s more than 400 words just about the main character!  The other characters are real, flawed, human, warm, silly and with baggage and hangups of their own.  The author skilfully coaxes out their personalities from under the protective forcefield of Jane’s shenanigans and allows them to shine in their own right, so the reader becomes just as attached to Pumps, Nobby, Biscuit, Springs, KFC, Good-and-Bad and the rest of them as Jane himself.  Even on-and-off characters like Kipper or Keanu are interesting and memorable.

Cause and Effect is like no other book I have read.  It is a well-constructed police procedural thriller, masquerading under the guise of a zany comedy, with a slowly-developed and deeply-felt romance at the heart.  I thoroughly recommend this book and cannot wait to get my teeth into the sequel – especially thanks to the cliffhanger ending!  Just endive to perspirate past the first few chapters, let go of your pride and your prejudices, and you will find yourself excessively diverted.

The cab tooted.  ‘Okay, tooting back,’ which only he knew referred to Totting Bec in London, but that didn’t matter, not to Jack in his event garden world, and he rushed out into the rain.
Michael called from the kitchen, ‘Avant-garde, Dad?’
The cab dropped Jack roadside.  ‘I’ll walk the rest of the way, it’s not like its pissing down or anything,’ but the subtlety of Jack’s sarcasm was lost on the cabbie.  Jack paid and ran to the reception doors, ‘Feckety Feck.’
‘Cats and Dogs, Jane,’ Hissing Sid remarked.
‘Cod and chips twice.’
‘Heard you the first time.’
‘Your family, they are well?’
‘Tolerably so.’

– Pete Adams, Cause and Effect

Cause and Effect is available on Amazon right now!

Don’t forget to check out the other stops on the blog tour (details on the poster below) for more great reviews and content!  You can also pop back to me on 14th September when I will be reviewing the next book in the Kind Hearts and Martinets series, Irony in the Soul. 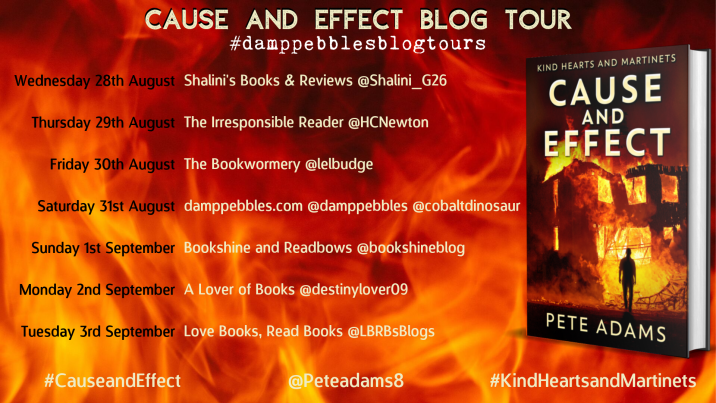 10 thoughts on “Blog Tour: Cause and Effect – Pete Adams”