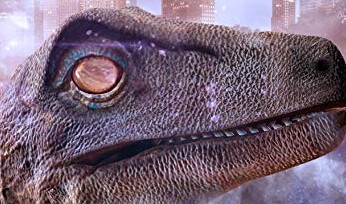 Or so Oak Jones thought. He’s wanted on the Police Dinosaur Unit all his life. Now that he’s in, he’s discovered that training a Police Working Velociraptor is a lot harder than he ever imagined. And if he thought training would be difficult, living with a Velociraptor is a whole new level of fun. Banshee can clear a six-foot fence like it was nothing, and he has a love for eating the neighborhood cats, which is putting Oak on the outs with his next-door neighbor, Christy Dao.

But there is a reason for everything, and when Oak discovers why Banshee struggles, it breaks his heart.

Terrible Lizard is a funny and endearing look at life with Banshee, a great working dinosaur, but one terrible lizard.

Absolutely brilliant in both concept and execution, Terrible Lizard follows Oak Jones as he chases his dream of being a police dinosaur handler, and his struggles to train the intractable Banshee – a velociraptor with a troubled past.

The book is written as a completely straight memoir – you could easily replace the dinosaurs with police dogs without losing the sense or style of the story – set in an alternate reality where dinosaurs did not become extinct and instead became tamed/exploited by humanity along with every other animal on the planet.

In the world of the PDU, dinosaurs make excellent track and search animals, and work as the perfect deterrent to ‘difficult’ and violent criminals.  Of course, they need rigorous training, and this is where Oak and Banshee’s journeys begin, as they embark upon the training and bonding regimes they need in order to become working partners.

I love Banshee.  It is impossible not to!  Oak comes across as diligent, hardworking, patient and thoughtful, but Banshee is definitely the star of this show.  Their bond is portrayed sensitively and with great realism.  I actually forgot we didn’t live in a world where you could bring your working dino home to meet your dates!

In Terrible Lizard, Doug Goodman has created the kind of touching animal-buddy story that you get with Marley and Me, with the police action of K9 or Turner and Hooch.  I would recommend this to anyone who enjoys fictional memoirs, animal stories, dinosaurs, or just a really good and different story.  I’m still smiling over a week after reading it!

Let me be blunt: being a dinosaur handler is the most fun and rewarding job you can have in the world.  The pay is horrible, and the trials and tribulations are tremendous, but I wouldn’t have chosen anything else.  So these memoirs are for everyone who’s ever wanted to know what it’s like being a Velociraptor handler.

Plus don’t forget to check out my review of Backpacking With Dinosaurs by the same author!