*I received a free copy of this book, with thanks to the author. The decision to review and my opinions are my own.*

Blurb: New Orleans attorney Jonathan Brooks is desperate to rebuild his law firm after Hurricane Katrina. Short on clients, he takes the only work he can find: a murky business deal in Ukraine. 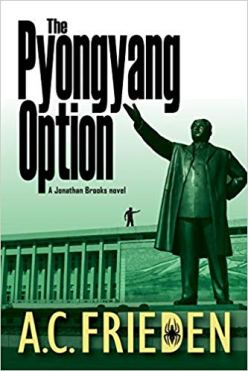 But after he lands in Kyiv, his client’s executive vanishes. Suspecting foul play, Jonathan enlists the help of a U.S. diplomat. But the next day they are brutally ambushed. Injured and racing against the clock, Jonathan embarks on a frantic search for clues through the back alleys of Kyiv to an abandoned town near Chernobyl.

Meanwhile, Jonathan’s ex-wife Linda, a journalist, lands in North Korea to report on historic nuclear disarmament talks. She begins probing local officials, not realizing that she and Jonathan are both on a collision course with a deadly web of hackers, spies and assassins.

To uncover the truth and save them both, Jonathan may have only one option: to go to Pyongyang with as much leverage as possible and try to make it out alive.

This is the third book in the Jonathan Brooks series and, while the plot stands easily alone, I definitely think that reading in series order would give a better sense of the character development.

Here, we start with lawyer Jonathan standing in the ruins of his life and seeing no option but to take the lucrative legal job offered to him in the Ukraine. Meanwhile his ex-wife Linda is heading to China to revive her paused career in journalism.

They both soon have many more causes for regret as Jonathan finds himself unwillingly embroiled in various political machinations, terrorist plots, and attempts at international technological espionage; which result in Linda becoming a feisty and resilient pawn in a game that leads them both to North Korea and plenty of peril-fraught action.

This is a fast-paced, high-stakes thriller, with Jonathan as the Jack Bauer or John McClane, rampaging his way reluctantly from investigative lawyer to full-on action hero.

My only slight disappointment was that the ending felt sudden and flat, as some of the complex plot threads remained unresolved and there is no clear climax to Jonathan’s adventures.

Anyone who enjoys action-packed spy thrillers, in a similar vein to 24 will love this complex instalment of Brooks’ international adventures.

Jonathan closed his eyes, but the chaotic raw images trampled in uncontrollably. The mental relapse made his heart race. His face began to sweat. And now he thought of what might await him in Europe. He was in debt to Kramer with no way to pay him back if he failed in his role. But for now, that’s all he had. He briefly pondered the predicament of other New Orleans lawyers he knew, some of whom had no doubt left the state in search of work. He suddenly felt damned fortunate. By the time he’d left the Iwo Jima and was back on Julia Street, he was firmly focused on Cramer’s project. Come what may in Kyiv, it would be good to get back to work, and the sooner, the better.

– A. C. Frieden, The Pyongyang Option

The Pyongyang Option is available on Amazon right now!