Blurb:  After Tabby’s father vanishes, a deep rift develops in Tabby’s family. Tabby’s mother is focused on being a star performer in her pharmaceutical sales career, while Ava, Tabby’s older sister, is living with grandparents in Cornwall. Tabby feels neglected by her mother 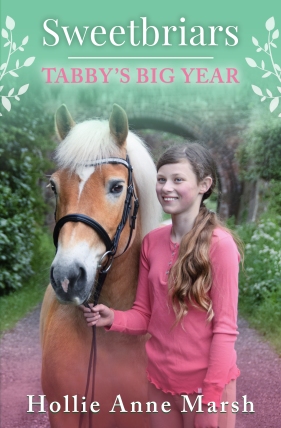 and jealous of Ava and although outwardly diligent and responsible, she’s like a kettle about to blow its top… bottling things up until it’s nearly impossible to keep a lid on her frustration and sadness.

Tabby finds solace with her best friends Cate and Violet at Sweetbriars Farm where she is nursing her dream horse Bliss back to peak performance, to be able to participate in the try-outs for the British Young Riders Squad.

Tabby also finds herself facing other challenges – saving her beloved horse Nancy from the knacker’s yard and finding the courage to tell her friends the truth about her family.

Will Tabby be able to save the horses she loves and be brave enough to tell people how she really feels?

A ‘Big Year’ indeed!  Tabby has a lot on her plate: a missing father, a secret sister, an otherwise occupied mother, and an injured horse right before the British Young Riders Squad try-outs!  Then she discovers some bad news about an old equine friend and her cup of troubles really does start to brim over.

I was really keen to join the blog tour for this book as someone who had a huge collection of Saddle Club, Thoroughbred, Jinny, Follyfoot and other similar horse/animal in trouble type series!

Sweetbriars did not let me down!

Tabby’s Big Year is perfect for animal/horse-mad middle graders (and upwards).  The plot is packed with conflict, but easy to follow, and the issues are (mostly) relateable (with the exception of a small eagle intrusion!).  And you can practically smell the saddle soap, hear the soft nickers, and feel your hair blowing out behind you as you canter!

Tabby faces a lot of challenges in the book and tries to tackle them all by herself, but she has friends and, maybe, family around to help her once she learns to trust and talk to them.  She sets a great example with her strong work ethic and morals, her love of animals, and her responsible attitude to… well, everything.  She does make mistakes, but she makes amends for them too.  So the book is wholesome as well as entertaining.

Whilst I can’t honestly say this is a book I would still choose to read as an adult, I can definitely say that I would personally buy it (and others in this series) for any horse-crazy child in my family and friends circle.  My daughter is a little young at 6, but I have earmarked Hollie Anne Marsh as one to remember in a year or so’s time!

Bliss had finished his food and rubbed his nose knowingly into Tabby’s pockets for more treats.  Tabby chuckled to herself and gave him another Polo, thinking how his appetite for Polos had never diminished!
she bent down to look at his leg and the thin grey scaly scar running vertically down the fetlock.  These days he didn’t flinch when she touched it, and the scar had healed nicely.  Only noticeable if you knew about it and looked closely.

Don’t forget to check out the other stops on the blog tour (details on the poster below) for more great content and reviews! 🙂