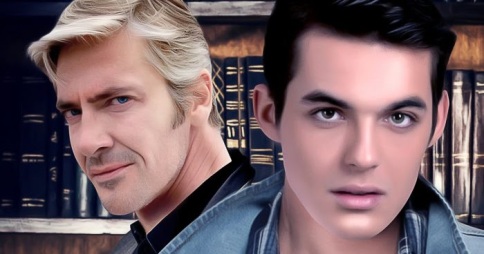 *I received a free ARC of this story, with thanks to the authors.  The decision to review and my opinions are my own.*

Blurb:  Among Oxford’s dreaming spires, can a widowed professor and a wide-eyed scholar make their own dreams of love come true?

Simeon Shakespeare is living his academic dream. As an Oxford scholar, he spends his days in libraries and whiles away his nights at the theater. A mix-up over a seat number leads to a very awkward first act, but that’s nothing compared to what happens when the lights go up.

Professor Anthony Meadows is finished with love. Shattered by the death of his husband, he divides his time between his book-lined study and Oxford’s theaters. The last thing he needs is an annoying research student bickering with him over who should sit where.

When Anthony and Simeon discover they have more in common than a shared love of the Bard, it looks as though the stage is set for romance. Yet with the memory of Anthony’s lost love keeping the professor from moving on, can Simeon’s love mend his broken heart?

This novella is a short, sweet MM romance that moves at something of a breathtaking speed – I was a little startled by how suddenly we jumped from seat numbers to endearments!

The main characters click almost as soon as they meet, but are hindered from rushing straight from meet-cute to first-date to bed by a combination of their own self-conscious diffidence (mainly rooted in concerns about their respective ages), respect for each other’s boundaries, and some deep-seated, unresolved grief.

Luckily the issues are fairly speedily resolved, as both realise the luck involved in meeting a kindred spirit and the waste it would be to let them go.  There is a classic May-December pairing here, which works beautifully with each man’s personality and preferences, and makes for some very caring moments on both sides.

The main features of the story are cute, fumbly flirting, some steamy sex, and (yet again from these authors) a warming dose of true love conquering all.  Oh and there are a few nods to Shakespeare along the course of said true love running semi-smoothly.  Exeunt omnes (not pursued by bears)!

Simeon was soon carried into the play.  The scenery was gorgeous, and he overlooked the unimpressive acting because whoever was playing Theseus–if only Simeon had had time to grab a program–was a thoroughly delicious silver fox.  As he settled into seat seventeen, Simeon became aware of a scent from somewhere nearby–a very pleasant cologne.  The kind that Theseus would wear, in fact.  Manly.  Distinguished.  The cologne of a mature man, who–
Christ, it isn’t the grumpy sod sat beside me, is it?
Simeon peered at him from the corner of his eye.
It wouldn’t be him.  He had the voice and manner of an old-school toff.  Lord knows this city has enough of the, and none of them wear cologne like that.  Oh for his own Theseus wearing that cologne.

A Late Summer Night’s Dream is out on Amazon right now!