Blurb:  Death once had a near-Chuck experience.

Meet Chuck Steak. His insides are well done. He’s a cop, but not just any. He’s the best. Hasn’t been one like him since the ‘90s. Won’t work with partners and disregards the collateral damage his boss is always screaming about. 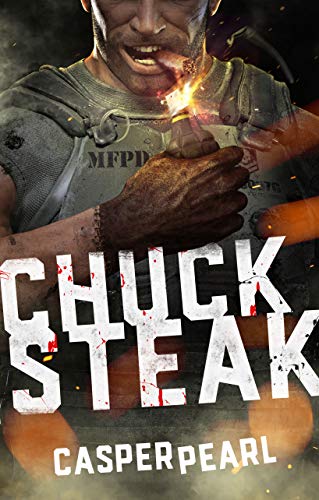 Chuck Steak is USDA Prime badass, so having a bomb planted inside Mia, his secret, longtime girlfriend who’s been dreaming of marriage for almost a decade, should be just another day at the office. The problem is, an elusive villain challenges Chuck to deliver Mia’s dream wedding within a week’s time, or she’ll blow.

Overwhelmed with “girly tasks”, Chuck’s forced out of his action-heavy comfort zone and into scenarios which require words instead of bullets. One results in the loss of his right hand, and when it’s replaced with a black hand, this white cop (now .65% black) encounters a new kind of villain: racism.

With time against him, Chuck will have to find a non-violent way to convince the love of his life and her disapproving family that this isn’t another publicity stunt—that after all of these years, it’s finally time to ditch the legacy he’s been slaving over in favor of the family she’s always dreamed of. All while overcoming unexpected hurdles like his own department and their trigger-happy mentality toward minorities, backstories, a feminist gang, incredibly friendly Muslims, dementia, depression, gender equality, and trying to maintain action-orientated roots in an increasingly politically correct world.

CHUCK STEAK is a violent, brutally honest satire of our very diverse, yet segregated society. It attempts to seamlessly blend themes of love and hate while examining the reasoning behind people’s sometimes idiotic actions. All while turning tropes on their heads and obliterating stereotypes with explosions.

Imagine you are just settling down to bed after an exhausting week.  Sleepily you set your bedtime routine underway by nomming a couple of cheese wheels whilst watching every action film ever made, then settle down for a nice bedtime read of internet discussion boards about political correctness.  Eventually you drift off peacefully, only to have the strangest dream…

Congratulations!  This is your brain on Chuck Steak.

Satirising everything from stereotypical action heroes to society’s changing view of personal identity and offensiveness, Casper Pearl romps cheerfully through tropes and expectations, knocking them all down.

Whilst Chuck, the titular character, is mainly reactive as he is forced to sprint from one scenario to another, the author inserts a distance from his characters and plot with lots of self-aware meta references to their fictional status.  The mysterious unknown villain calling the shots takes Chuck on his whistle-stop tour of heroism, with the book split roughly into vignettes of each task he faces.  In contrast the ending is thrown upon us abruptly after a lot of build-up, and feels somewhat disjointed, with a different style and tone to what preceded.  Then, just when you think everything is wrapped up, the author gooses us with the set-up for the sequel.

The tone veers wildly from OTT political correctness to downright silly offensiveness and back again and the plot is chaotic and surreal, but great fun too.  Think Airplane, Naked Gun, Hot Shots but less subtle and delicately nuanced.

This book would make a good comedy film in the hands of someone like the Farrelly brothers, Ben Stiller or Matt Stone and Trey Parker.  Lots of explosions, fist fights and gun fights, with a large heaping of slapstick and gross-out humour on the side.

Riotous in more ways than one!

He had once rung her from inside a burning building to see if she wanted to maybe, sorta watch the newest Terminator which had finally arrived on Netflix, even though he proceeded this with, “I know it’s gonna be bad, but–” and then he paused, and she heard the fire’s tendrils lashing out at him, to which he said, “–sorry, gotta jet.”  And before he severed the call, he giggled.  She’d later learn this was in reference to a fighter jet which had crashed into the building Chuck had been trapped inside as they conversed about the latest Terminator.