*I received a free ARC of this book, with thanks to NetGalley and Penguin. The decision to review and my opinions are my own.* 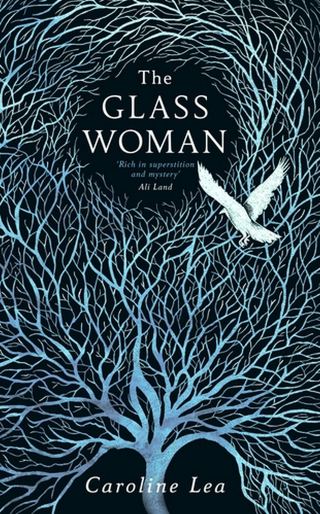 Blurb:  Iceland, 1686. The brutal, lava-scarred landscape can swallow a man without so much as a volcanic gasp.

Jón Eiríksson has just married his second wife in a year. But Rósa’s new home in the windswept village of Stykkishólmur is terrifyingly isolated – the villagers are suspicious of strangers and fearful of something which they will not name. What is her new husband terrible secret, and why does the spectre of his first wife Anna haunt them so?

Set against the backdrop of the seventeenth-century Icelandic witch trials, in a land governed by religion and fear, THE GLASS WOMAN is addictive, breathtaking, and perfect for readers of BURIAL RITES and THE ESSEX SERPENT

Caroline Lea plunges the reader deep into the frozen heart of an Icelandic winter in the 17th century.  The writing is so evocative that as you read you strain to offset the effects of the wan light reflecting blindingly from the snowy expanse, and turn the heating up a notch as you feel your breath icing on the pages.

Life is hard for Rósa.  It is a struggle to carve a living in a small village and bleak conditions, but the fault of being born female restricts activity further still, and with suspicion falling on anyone who can read or write and accusations of witchcraft hanging in the air like a poisonous fog, her days offer nothing beyond hunger and housework.

Forced to trade herself to a wealthy outsider in exchange for her mother’s wellbeing, Rósa finds herself isolated further still by a controlling husband simmering with suppressed violence and suspicion.  Naturally, the enforced isolation paired with the intrigue of dark secrets half-suspected causes her grip on her meek wifely facade to slip dangerously, along with her fear for her sanity.  Of course, the noises in the attic don’t help!

I was reminded very much of Gothic and/or feminist classics such as The Yellow Wallpaper, Rebecca, Jane Eyre or even (older still) the story of Bluebeard and his wives.  It is not only the frigid setting that casts such seemingly familiar stories into a fresh perspective however, but the characters themselves.  Jón, Rósa, Katrín, Anna, Pétur and Páll all have a complexity of motive and morality that renders them almost unfathomable and their actions unexpected, layering an addictively disorienting mystique over events.  Lea shows a knack for presenting the reader with people and monsters, and then monsterising the people and humanising the monsters.  It doesn’t do to judge on first impressions here.

The plot begins at a critical and climactic moment, then slips back to fill in the events that lead to that point and beyond.  The story creaks along with glacial slowness for the first two-thirds of the book – claustrophobic, repetitive and achingly cold – really emphasising the gradual erosion of the main character’s spirit and will.  Then, with the suddenness of a thrown snowball, events begin to cascade, and the last third of the story is an avalanche of action and revelations that will leave you breathless and reeling.  Once the snowstorm settles it reveals that whilst life may never be the same for our characters, the land and its culture continue majestically on unchanged by the specks of warmth that flicker on the surface.

The Glass Woman is a fascinating and chilling Gothic tale that will entertain and reward the patient reader.

He remembers carrying the heavy body in the winding sheet, weighted with stones; remembers his wound paining him as they scraped through the snow and smashed the ice with long staves before sliding the body in.  The sea had swallowed it immediately, the flash of white vanishing into the darkness.  But the knowledge of the body stayed, like the blood-spattered scenes at the end of the Sagas: those age-old, heat-filled stories, which are told to children from birth and fill every Icelander with an understanding of violence.

Six days ago, he had muttered a prayer over the black water, and then they lad laboured back to the croft.  The ice had crusted over the hole by moon-down, and by the time the pale half-light of the winter sun seeped into the sky, the snow concealed it.  Weather masks a multitude of sins.

But the land in Iceland is never still.  The grumbling tremors or the sucking of the waters must have dislodged the stones, and now the body has bobbed upwards and broken through the cracks in the ice.  And here it is.  Waving.

The Glass Woman is available at Amazon and all good bookshops right now!