Blurb:  From No.1 Private Detective to No.1 Suspect

A cryptic message from an old friend leads Joe Grabarz to an abandoned farmhouse in the middle of the South Downs. But Joe is too late, someone else has got there first: his friend is dead, and all the evidence points to him.

Ten years ago the farmhouse was the scene of three infamous murders when a young boy killed his mother, father, and little sister. Now an adult, he was released from prison with a new identity. Could he be involved? The farmhouse also sits on valuable land, fought over in a struggle between building houses and drilling for shale gas. But could it really be worth killing for? Whatever is going on, Joe knows one thing for sure: his friend’s murder is just a tiny part of it.

To bring the killer to justice Joe must dig up the past, and reckon with his own, because no matter how hard you work, it never goes away.

This is the third book in the Brighton Detective series and I strongly recommend reading them in order.  The cases and characters develop over the course of the stories and this book contains the culmination of some long-running mysteries from the previous two.

That said, I was completely wrong-footed to start, as the Grabarz we meet in the first few pages here is very different to the one we left at the end of book 2.  Joe is on a high from his previous good publicity and is wearing smart suits, living and working in flash new digs, and reprimanding his subordinate associates for their unprofessional behaviour – Grabarz, what gives!

Luckily his luck doesn’t last, and he is soon plunged into his most fraught adventure yet; packed with daring getaways, bodily violence and plenty of betrayal.  This is proper edge-of-the-seat stuff.

Yet somehow Trott manages to thread some serious themes through the storyline too: themes of regret, justice and how we go about living with the consequences of our actions.

I was totally blindsided by the finale, but I’m not sure why as it was the only possible outcome for Grabarz, given his character and development over the series.  This felt like an ending, but I am harbouring a small hope that it is merely a pause to regroup and that Grabarz, like many an action hero (however unlikely) will be back!

Clarence Alderney used to be the private detective the rich went to, until I got some good publicity and started wearing suits.  We were in direct competition like never before, but I liked to believe we were still on good terms.  He was a different type of detective, for a different type of case.  The type where no one got hurt.  Despite enough reasons not to, I trusted him.  He had sent the message by courier.  It was simple:  “Meet me at Piddingworth Plantation at midnight tonight.”  And yet his footprints were leading the opposite way.

– Tom Trott, It Never Goes Away 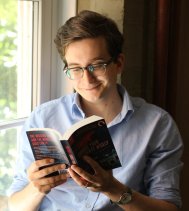 It Never Goes Away releases on Amazon on 1st March – preorder it here!

Please remember to check out the other blog stops on the tour (poster below) for more great content and reviews, and follow these links for my reviews of Books 1 and 2.

2 thoughts on “Blog Tour: It Never Goes Away – Tom Trott”