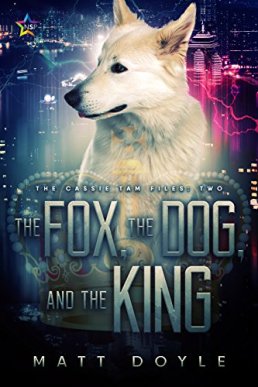 Blurb:  New Hopeland City may have been built to be the centerpiece of the technological age, but some remnants of the old world still linger. The tools of the trade have changed, but the corruption remains the same, even in the criminal underworld …

When PI Cassie Tam and her girlfriend Lori try to make up for their recent busy schedules with a night out at the theatre to watch the Tech Shift performer Kitsune, the last thing they expected was for Cassie to get a job offer. But some people are never off the clock, and by the end of the evening, Cassie has been drawn into a mundane but highly paid missing pet case. Unfortunately, in New Hopeland City, even something as simple as little lost dog can lead you down some dark paths.

Until now, Cassie wasn’t aware that there even was a rabbit hole, let alone how far down it goes.

Another great sci-fi tech novel from Matt Doyle, featuring the efficient and emotionally strait-laced Cassie Tam taking on her smallest and biggest case yet… and it’s the same case!

A missing dog leads to deeper, darker secrets in the corrupt world of New Hopeland and Cassie has to decide between the lesser of many evils again, taking her further into a morally grey area and out of her good-vs-bad comfort zone.

One of the things I liked about the previous book was that the main character’s sexuality was integral to her characterisation, but not to the plot, and the author achieves this normalisation again here, effortlessly including non-binary gender characters without revolving everything around their genitals.

Identity is a plot theme here, but it is more about the public faces we present to the world versus our private personas, and how differences between the two can enhance or inhibit career choices.  This ties in with the longer-running theme of the series, featuring the Tech Shifters and Cassie’s uncomfortable acceptance of their choices.  The added technical information at the end of this novel clarifies a lot more about the Tech Shifting mechanics, and also made me wonder whether Cassie was becoming more open to the technology herself?!

Readers who enjoy well-written PI mysteries, like Sue Grafton’s Kinsey Millhone series, crossed with futuristic urban sci-fi will love this series.  And of course, there’s the cute sidekick Bert as an added incentive!

I sigh and lean back against the wall next to the disturbingly clean toilet.  “I guess I could do with a break.”
“Good,” Lori says and pushes the door open.  “She’ll take the case,” she yells and shoots me a wicked grin while Kitsune starts shouting back their thanks.
My jaw drops open in shock.  Lori’s argument was sound, but the money is still uncomfortable.  Now I really will have to concentrate on Kitsune’s case to make myself feel better about accepting it.  Lori knew that I might change my mind and just made it so that I can’t back out.  “I can’t… you just…” I whisper-shout.
“Yup,” Lori winks.  “You can thank me after you find the lost little puppy.”

– Matt Doyle, The Fox, the Dog and the King

The Fox, the Dog and the King is out on Amazon right now, and please do check out my review of the previous book in the series, Addict, here!

3 thoughts on “The Fox, the Dog and the King – Matt Doyle”