*I received a free ARC of this book, with thanks to NetGalley and Bloomsbury. The decision to review and my opinions are my own.*

Blurb:   In a lush, contemporary fantasy retelling of Beauty and the Beast, Brigid Kemmerer gives readers another compulsively readable romance perfect for fans of Marissa Meyer.

Fall in love, break the curse. 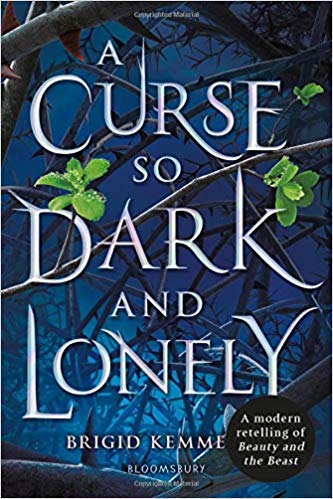 It once seemed so easy to Prince Rhen, the heir to Emberfall. Cursed by a powerful enchantress to repeat the autumn of his eighteenth year over and over, he knew he could be saved if a girl fell for him. But that was before he learned that at the end of each autumn, he would turn into a vicious beast hell-bent on destruction. That was before he destroyed his castle, his family, and every last shred of hope.

Nothing has ever been easy for Harper. With her father long gone, her mother dying, and her brother barely holding their family together while constantly underestimating her because of her cerebral palsy, she learned to be tough enough to survive. But when she tries to save someone else on the streets of Washington, DC, she’s instead somehow sucked into Rhen’s cursed world.

Break the curse, save the kingdom.

A prince? A monster? A curse? Harper doesn’t know where she is or what to believe. But as she spends time with Rhen in this enchanted land, she begins to understand what’s at stake. And as Rhen realizes Harper is not just another girl to charm, his hope comes flooding back. But powerful forces are standing against Emberfall . . . and it will take more than a broken curse to save Harper, Rhen, and his people from utter ruin.

This book is Beauty and the Beast retold from a fresh perspective, with the beast a tortured prince of a medieval-style fantasy realm and the beauty a modern US teenager with a mobile phone and a fiercely independent attitude.

I love the clash of these two worlds, and found Harper especially compelling and empathetic as she gradually finds her strength and sense of identity via an entirely unfamiliar role.  The author avoids the trap of dwelling on the character’s Cerebral Palsy and instead makes it a natural part of her life and identity, the same as her hair colour or stature.  It is always great to see representations of more varied and interesting characters in a hero/heroine and Harper’s fighting attitude is admirable.

Rhen was a more problematic character, but then, that is how the beast is supposed  to be: if he wasn’t flawed on the inside then he would never have been cursed with the looks to match!  It was really good to see that his curse had greater implications than the trite ‘judging a book by its cover’ moral, and that the real pain wasn’t found in how he looked but how he behaved.  If only we had seen him with a bit more life still in him, even if his attitude then was awful.  As it is his defeatism and introspection were a bit wearing, so it is lucky we had Grey and Harper there to cheer things up and kick the plot forward.

The author avoids making the romantic aspect of the plot too central by making the character’s feelings far more believable than the source material.  Rather than falling in Stockholm Syndrome over porridge gobbling and a ballroom dance the main characters develop strong bonds of mutual respect and understanding, but hearts and flowers are in shorter supply as they face some of the real challenges of managing a feudal kingdom.  Whether it all leads to ‘true love’ or not by the climax… you’ll just have to read it yourself to find out!

I will confess to being slightly confused towards the ending, as I had been hooked following Rhen, Harper and Grey throughout their struggles to break the curse, save the kingdom and find themselves so the ambiguity regarding a lot of the big questions was a little disappointing.  This was quickly explained when I read that there is a sequel on the way.  I hope it doesn’t take many seasons to arrive, as I want to know what happens next!

A siren kicks up somewhere nearby, but it’ll be too late.  I try to claw at his face again, but I catch his neck instead.  Blood blossoms under my nails, and his eyes turn murderous.  The sky lightens fractionally behind him, turning pink with streaks of orange.
His free hand lifts and I don’t know if he’s going to hit me or strangle me or break my neck.  It doesn’t matter.  This is it.  My last sight will be a glorious sunrise.
I’m wrong.  His hand never strikes.
Instead, the sky disappears altogether.

– Brigid Kemmerer, A Curse So Dark and Lonely

A Curse So Dark and Lonely releases on 29th January but you can preorder it on Amazon right now!

One thought on “A Curse So Dark and Lonely – Brigid Kemmerer”