Blurb:   Guy just woke up to a world of questions.

First of all, he has the mother of all hangovers, the kind that breaks a man for at least a day or two. Second, he has no idea who the blonde in bed with him is, and why they are both naked. Third, he doesn’t know who the hairy beast in the living room is, or exactly where he is. 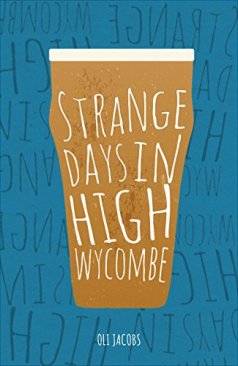 Over the course of one weekend, Guy must find out the answers to all these questions, and more. Along with the hairy beast – who turns out to be his “guide” Kriste – they will travel from grassy knolls, to flash shopping centres, all in search of answers.

Who is the blonde named Hartley? And why is she so important to Guy?

Why is he in Wycombe? And why can’t he leave?

And where, oh where, is the next pint coming from?

Like the literary equivalent of a particularly enjoyable drinking binge, Strange Days in High Wycombe is another comic adventure from the mind that bought you Kirk Sandblaster & Bad Sandwich. Dive in, have a read, and pour yourself one of the finest ales known to man while you’re at it.

Strange Days in High Wycombe is the self-narrated inner thoughts and feelings of the thoroughly unlikable Guy as he spends a long weekend drinking himself into a stupor and making no friends.

It took me a little while to get the ‘feel’ for the book, because the main character is so full of absurd pomposity and sprays bile and disdain over everyone he meets, making it difficult to empathise with his adventure.  However, as he stumbled through his weekend it gradually clicked: Guy is Hugo Rune without the gentling influence of Rizla;  Withnail without I; Bernard without Manny and Fran.  He is a chaotic, immature character let loose among the influences of sex, drugs and alcohol with little to restrain the resultant obnoxious behaviour.  He is also sexist to the point of downright misogyny and dismisses women as sluts, tarts and temptresses, based on their clothing and heir willingness to speak to him.  As the character slowly begins to grow his mindset during the course of the story, it is clear that the author is showing us that small minds do have the capacity to open up (apparently with the aid of copious lubrication!).

The author’s writing style adds to the comedic comparisons with its bantery, tongue-in-cheek style, nodding and winking to the reader as Guy and Kriste’s excesses stack up.  This is a story where not a lot happens in terms of plot, but the character is guided through various disasters and experiences that lead to a revelation about himself and his behaviour.

Locals to High Wycombe will no doubt recognise various locations and ‘in jokes’ that are lost on outsiders, as Oli Jacobs guides us, via Kriste, through the pub, club and restaurant scenes affectionately and with his trademark irreverent humour.

This won’t be for everyone, but fans of Robert Rankin,  Withnail and I and Black Books will recognise and enjoy this chaotic lurch through the various hostelries of High Wycombe, talking toot and achieving… well, not a lot!

And there I stood.  Cold, mono-socked and still in the dark.
With Kriste behind me.
“Tea?”
“No!”
“…Vodka?”
What?  He had my attention now.  Who on Earth would suggest Vodka as a morning pick-me-up?  Apart from the mad, deranged and addicted?  I was neither one of these three and yet Kriste had taken it upon his person to lumber me in with those degenerates.  What a bastard.  If I hadn’t been in a state of semi-nudity I would have taken him to task.

For my review of Oli Jacob’s The Lament of the Silver Badger check here, for The Space Adventures of Kirk Sandblaster have a look here, or for Wrapped Up In Nothing, try here.