*I received a free ARC of this book with thanks to the author, Flame Tree Press and Anne Cater of  Random Things Blog Tours. The decision to review and my opinions are my own.*

Blurb:   David Botham just wants a quiet ordinary life―his job at the travel agency, his relationship with his girlfriend Stephanie.

The online blog that uses a title he once thought up has nothing to do with him. He has no idea who is writing it or where they get their information about a series of violent deaths in Liverpool. If they’re murders, how can the killer go unseen even by security cameras?

David is not a writer.  Please don’t get the idea that he is a writer, because he is not.  Definitely not a writer.

Aside from that, he is clearly also not happy.  He lives a humdrum life, surrounded by people who irritate him intensely, and his response is to lie flatter and let the world wipe its feet on him while he politely apologizes for scuffing their shoes.

Lucky, is a different, darker story.

Throughout the novel the mystery and horror lies in the unknown which David is dealing with: is this Jekyll and Hyde?  American Psycho?  Fight Club?  How much of what is happening is real and how much is inside his head?  Or is he, in fact, out of his head (literally or figuratively!)?  Does he have control, and therefore responsibility, over events?

The book was a little hard to get into at first, as the writing style is similar to the chaos of a Robert Rankin far-fetched fiction, but whilst Rankin embraces and exalts the eccentricities and idiosyncracies of his characters, Think Yourself Lucky feels more mean-spirited – glorying in exposing and mocking perceived weaknesses and quirks.  This is deliberate and the reasoning becomes clearer as the plot unfolds, but it takes a little initial perseverance as we first familiarise ourselves with David’s drudgery and all the petty miseries it involves.

Similarly the dialogue style is unique, as every conversation forms part of an elaborate and extended word association game, as each character dances round the others’ meaning without any direct speech or clear understanding.  Again, deliberate on the part of the author.

Think Yourself Lucky is a paean to honest, direct communication and a very dark take on what can happen when we repress our thoughts and emotions until they take on a life of their own.  Or do they?!

Recommended for fans of chaotic horror/fantasy, who enjoy plenty of word play, tongue-in-cheek digs and winks to the writerly fourth wall.

Only streetlamps lit the bookcases full of hardcovers that smelled stale, the shelves of nondescript glossy self-published paperbacks.  All the way to the door David felt as if he was toiling through a medium composed of dimness and haphazard thoughts.  He was never going to be a writer, he promised himself.
Even Kinnear hadn’t mentioned all of David’s diatribe; he’d left out David’s gripe about the homeless man who’d tried to sell him a magazine.  If this left David feeling even more shameful, at least it guaranteed that he would never publish any of the thoughts he should have kept to himself.  Better yet, he wouldn’t have them.  As he stepped out of We’re Still Left he saw the roofless church across the road, the walls left standing as a monument to the blitz, and it put him in mind of a hollow prayer.  He suspected that was how a writer might think, and he expelled the fancy from his mind as he tramped downhill to the station.

Think Yourself Lucky will be released on 30th November 2018, but you can preorder it on Amazon right now!

Tomorrow is the wonderful Sara at Not Another Book Blogger blog… 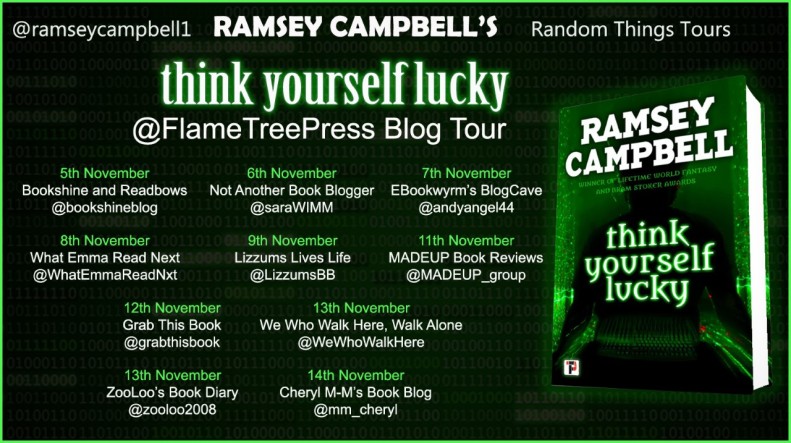