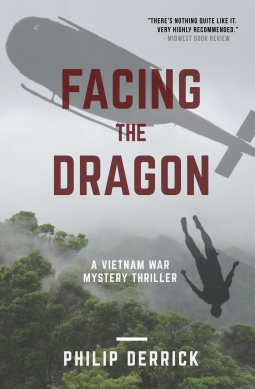 Blurb:   January 1970 – Just over a week ago James Peterson was a high school freshman whose biggest worry was passing his Geometry class. Now he’s in South Vietnam impersonating an army paratrooper. He’s not there for glory but to make up for his cowardice and solve a mystery.

But can a fifteen year old boy survive without any military training?
Can he find the answers he seeks?
Or will someone see that he’s shut down permanently?

2.4 million men served in South Vietnam. Join the adventure and meet the most unusual one of all.

As soon as I finished Facing the Dragon I was inspired to do a little background research of my own, and can therefore confirm to any doubting readers that a 15-year-old boy can, and in fact did, get into the Army and end up in the field in Vietnam.  Philip Derrick actually notes this as well in his factual afterword to the novel.

My other ‘research’ was completely unnecessary as it was completely obvious in every word of the story that Philip Derrick knows the Army.  He not only clearly knows the Army, but he knows war in general and Vietnam in particular.  You can confirm this, as I did, at his website, but you really won’t need to.  The personal experience and knowledge comes through clearly in all the details of weaponry, drills, bombardments and procedures.

This wealth of war knowledge is framed in a mystery thriller that revolves around the cycle of revenge.  Many deaths beget many more in an unending pattern that incorporates two wars, peacetime murders and endless atrocities.  Whilst acknowledging the perpetuation of the slaughter, the protagonist is also unquestioning of the need for violent closure: an eye for an eye.

I was somewhat confused about the main character, Jim, at the start of the story.  The narrative is told in alternate segments, from Jim’s first person narration to the third-person narrative of his personal nemesis, and Jim’s sections just didn’t sound like a 15-year-old boy.  His reactions to some horrific events seemed muted and his analysis too thoughtful and considered.  The key is in the word analysis: the author seeds the text with hints that clue us in that Jim’s narrative is being related after the fact, and that the voice (and opinions) are those of an older and more weathered character than the teen we meet in the car on his way to Disneyland.

Obviously there is violence involved throughout the book and some racist attitudes, but nothing out of the context of the time and situation.  Some may find the WWII Dachau details disturbing, but again, the information is in historical context and the emotional impact is proportional to the scale of human tragedy.

I can highly recommend this book for anyone looking for an immersive and authentic feeling Vietnam story, with a dash of killer thriller alongside.

After a while I felt someone staring at me.  It was so strong I gave up looking at the redhead and scanned the crowd left to right, section by section.  I could feel the hairs rising off the back of my neck.
By now the ranger on stage had progressed to how the caverns were discovered by a local teen, decades earlier, but no one believed the kid.
That’s when I saw him.  Blonde crew cut.  Big guy, well over six feet.  The type you didn’t cross.
He was on the other side of the U-shaped bowl of seats, wearing an Army green uniform and staring directly at us.  I didn’t doubt it for a moment.  There are times when someone is caught looking at you and you know.
I knew.
An icy finger of unease slithered up my spine.

Facing the Dragon is available on Amazon right now.