*I received a free copy of this book via NetGalley, with thanks to the author and publishers.  The decision to review and my opinions are my own.*

Blurb:   The life of 79-year-old pensioner Peggy Smart is as beige as the décor in her retirement village. 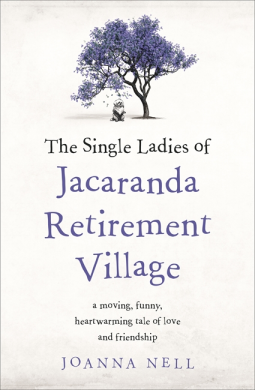 Her week revolves around aqua aerobics and appointments with her doctor. Following a very minor traffic accident, things have turned frosty with her grown-up children, and she is afraid they are trying to take away her independence. Noticing her memory isn’t what it used to be, Peggy is taking ever more inventive steps to cover up her dwindling faculties.

The highlight of Peggy’s day is watching her neighbour Brian head out for his morning swim. She dreams of inviting the handsome widower – treasurer of the Residents’ Committee and one of the few eligible men in the village – to an intimate dinner. But why would an educated man like Brian, a chartered accountant no less, look twice at Peggy? As a woman of a certain age, she fears she has become invisible, even to men in their 80s.

But a chance encounter with an old school friend she hasn’t seen in five decades – the glamorous fashionista Angie Valentine – sets Peggy on an unexpected journey of self-discovery.

What a lovely, lovely book!

It took me a little while to get into the story and characters, as Peggy at first came across as so scattered and insecure that it was hard to get a ‘feel’ for her as a main character.  It wasn’t long though before her common sense and sense of humour pushed their way to the forefront and then I wholeheartedly adored her.  And Angie, and Basil, and Brian, and Jim, and Celia…!

The ‘supporting cast’ here are fabulous.  They clearly start out as caricatures via Peggy’s perceptions and prejudices but gradually all preconceived ideas about who they are and what they do slip away and genuine personalities shine through.

This encapsulates the whole theme of the book: not judging by age, or appearance, or interests, as people are complex and can surprise you.  In Peggy’s case she can even surprise herself and often does!

I found her little malapropism quirk totally endearing.  It threw me slightly at first, as I wondered if there had been an editing error, but once I cottoned on to it being the character making the mistakes, not the writer, then I thoroughly enjoyed her innocent howlers (‘orgasms on the kitchen counter’?!).

There are no huge events here, other than the slow physical deterioration of the human aging process and the effect that has on our self-image, and how others view us.  These topics are explored with an honesty, warmth and humour that left me feeling surprisingly okay with the idea of retirement homes and joint replacements!

I would recommend this book to those who like an uplifting read about relationships and life as an elder which will have you crying, smiling, cheering and ‘awwww!’-ing.  I didn’t want to put it down!

‘This is all so humiliating,’ Peggy picked at the edge of the blanket with her good hand.  It was like she couldn’t trust her own body anymore, as though someone had reprogrammed it for a cheap laugh.
‘Sometimes, I’m sick of being me,’ she said.
‘Well, suck it up, sweetheart,’ replied Angie, ‘because everyone else is taken.’
Peggy smiled in spite of herself.  Part of her had missed Angie and that no-nonsense attitude.  She’d never admit it.  Peggy Smart still had her pride.  In this case, it had come after the fall.