Blurb:  After the war is lost, all that remains is to survive. And when you know what you’ve done, you can’t hope for anything more. 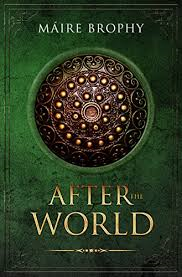 Bereft in a hostile world, an orc general struggles to come to terms with his role in the destruction of his people. Running and hiding from the humans and elves that hunt him down, he searches for other orc survivors.

When two human wizards finally pin him down in an abandoned orcish mountain fortress, he must use his wits and cunning to prevail, redeeming himself and the magic of his people.

I have never read anything like this novel.  In a good way!

We follow a nameless orc’s first person narrative as he survives after the utter defeat of his people in an epic war against the ‘day creatures’.  The story is familiar, yet thoroughly subverted and new, as we see stories similar to Tolkien’s but from the other side of the battlefield.

Particularly clever is Máire Brophy’s skill in retaining the expected orc traits of bloodthirstiness, crudeness, arrogance and so on, and yet still making her protagonist sympathetic to the reader (if not always likable).  It was a strange feeling to find myself rooting for the orc against the humans he encounters!

Likewise orc civilisation is shown to be more complex than generally imagined: differences in behaviour and outlook can be attributed to the prioritisation of different values in orc society, and suddenly orcish qualities become more understandable and defensible.

The pacing is quite slow and the focus of the plot is less on the action, which is minimal, and more on the psychology and character growth of our anti-hero as he comes to terms with the crushing defeat and annihilation of his race, and his own part in those events.  At times the character almost seems lost in madness and the current events merely products of his traumatised mind seeking redemption.

The ending offers some hope and suggests a promise of more to come in this world-after-the-world, which is an exciting prospect, with the potential of much more food for thought in the twisting of tropes and genre expectations.

Not a long read, but very entertaining, fascinating and utterly recommendable!

It had been years: scavenging, subsisting, crawling, hiding.  We forgot in the glory of our civilization how it was possible to survive on so little.  Orcs said we would “rather die” than carry on without our place, our people, our dreams.  And yet, here I was.  Surviving.  Surviving on the things that were even slower, or stupider than me, slow and stupid as I was.  I fed on them, and time.
“Time is a changer; time is a cycle.  What was once will be again.”  I told myself this on days when I had hope.

– Máire Brophy, After the World

After the World is available on Amazon now!

2 thoughts on “After the World – Máire Brophy”