*I received a free ARC of this book with thanks to Headline Publishing and Anne Cater of  Random Things Blog Tours. The decision to review and my opinions are my own.*

Blurb:  This is no ordinary love story and Sam is no typical hero…but he is a hero.

Sam Holloway has survived the worst that life can throw at you. But he’s not really living. His meticulous routines keep everything nice and safe – with just one exception…

Three nights a week, Sam dons his superhero costume and patrols the streets. It makes him feel invincible – but his unlikely heroics are getting him into some sticky, and increasingly dangerous, situations.

Then a girl comes into his life, and his ordered world is thrown into chaos … and now Sam needs to decide whether he can be brave enough to finally take off the mask.

Both hilarious and heart-warming, this is a story about love, loneliness, grief, and the life-changing power of kindness.

This book broke me.

For approximately the last third (and for about ten further minutes after putting it down) I sat gripping it tightly with tears streaming down my face.  I’m still suffering from the emotional hangover hours later!

Truly The Unlikely Heroics of Sam Holloway is a brilliantly crafted and terribly raw story; perfectly capturing the awkward clumsiness of real life in comparison to the heroic narratives we devour and imagine ourselves part of.

We read comics and picture Batman (or your hero of choice) slipping silently through the shadows then BAM POW taking out the bad guys with expert precision.  Sam’s Phantasm brings that to painful, funny-but-achingly-sad life with his utility belt full of smoke bombs and Cherry Coke, rape alarm and chocolate bars.

I can see why this book has been compared to Eleanor Oliphant is Completely Fine.  There are definite similarities in both plotline and characterisation, as both novels feature a protagonist who has dealt with great personal tragedy by withdrawing from the outside world into a tightly-controlled isolation of routine and comfort.  It is also human contact, via friendship and/or romance, that sparks the fuse that begins both Sam and Eleanor’s journeys towards a happier life.

Still, I was more concerned for Sam.  The most concerned for him that I think I have ever been whilst reading, and I am a Robin Hobb fan!  The whole experience of watching his carefully-constructed life detonate in slow motion is heartbreakingly tense, especially as the reader sees each brick fall long before Sam ‘Denial’ Holloway acknowledges the impact!

I can’t recommend this book enough.  Book groups, fans of superhero narratives, those who like humour and/or pathos, romance, action, emotion.  Buy it, read it and come talk to me about it!

For Sam the magic of stories went far deeper than mere entertainment – they wove an alternate reality in which he could feel less alone.  When Harry and his friends went to Diagon Alley for sweets or wands or broomsticks, he was right there with them.  He loved the world the author built, felt himself sliding off his bed and into the pages of the book, into another universe.  This transporting experience, where he could be with other people, was immensely powerful, and it was in books he found his first real friends. 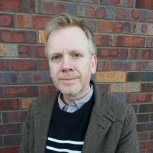 The Unlikely Heroics of Sam Holloway is out on Amazon right now!

N.b.  The above poster should read ‘Tuesday 14: Bookshine and Readbows @bookshineblog’, but then you already knew that because you are already here! 😉