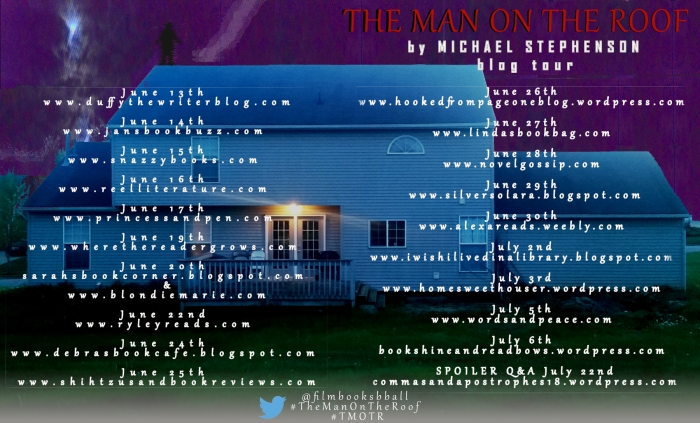 *I received a free ARC of this book, with thanks to the author.  The decision to review and my opinions are my own.*

Blurb:  Someone has been creeping in the dark while the others sleep, and they’ve done terrible, terrible things.

“There was a man on your roof,” claims curmudgeonly lane-hermit Herbert McKinney. Then, he initiates an unprovoked fight with a local punk. Drama escalates when that punk’s dead body is found hanging at mid-street one August morning—a boastful killer messaging their next prey. All fingers point to Herbert as the culprit. Soon, the five couples he calls neighbors come under suspicion, too. When lead detective Cady Lambert divines blackmail as the motive, eyes cross to find who hides the most shameful secret. Husband versus wife, friend versus friend, the shiny suburban veneer of innocence has been forever tarnished. As hidden deviousness boils from their pores, there lurks a thief, a pill addict and a sadist—secrets worth killing for.

Now, as the man on the roof helps guide justice and watches devious neighbors slip in and out of sleepy houses, confusion and questions persist. Who dies next? What have they learned? Who is becoming a monster? Who already is one? And just how many secrets can a small group of multi-ethnic Ohioans have? Only one cemented truth exists: the killer will kill again.

A tension-building psychological mystery-suspense thriller, The Man On The Roof propels the reader through a tangled, volatile and suspenseful thicket of deception, murder and friends, inviting the reader to discover the murderer and who hides which lie.

I was expecting a suspenseful mystery-thriller, but The Man on the Roof is also a slow, creeping descent into the hysterical madness of a closed community of very damaged people.

Each of the ten suspects, neighbours, has their own dark secret, but one is also a killer.  I actually found myself listing the characters names out on paper, then the secrets (paedophile, thief, spy…) and trying to match the two up puzzle-style as I read the clues.

Aiding and encouraging this detective work, the author intersperses the third-person storyline with anonymous first-person narratives from Suspect 1, Suspect 2 etc.  These narratives deliberately obscure other details, avoiding pronouns or physical descriptors.  These passages were fascinating and formed an essential part of the clue-gathering for the reader, but they were also highly unsettling in tone.

Not only does each of the main characters have their secret, but they all seem to share a loathing for themselves, their lives, their families and friends.  Not one internal monologue revealed anything positive like love, or affection, or kindness.  Either they are all extremely unlikable people, or the poison has been seeping through the mental landscape of Shady Lake Lane for longer than anyone could have suspected.

This book is not an easy read.  It is long, complicated and stuffed full of description, detail and dark thoughts.  There were quite a few word-swap errors (eg ‘except’ instead of ‘accept’) which could have been avoided with further editing.  There were also quite a few points that I was somewhat taken aback by some of the negative attitudes towards race, sex, gender, which seemed to be more attributable to the omniscient narrator than the characters.  This was especially noticeable towards the earlier parts of the novel, in many of the physical character descriptions.  However these seemed to wane as the plot really got underway and moved away from the introductory stages.

The police aspects were a little bit confusing to me, as they seemed to rule out certain motives and suspects on instinct with no real reasoning behind them, so I wasn’t really surprised that they struggled to make much progress.  I suspect more efficient and thorough investigators may have managed to uncover some of the shenanigans sooner and thereby deprived the reader of the dramatic climax!

I did particularly enjoy the ending.  Having matched up most of the suspects with their vices accurately, I guessed the killer completely wrong and was as blindsided as the characters when the big reveal exploded into chaotic action.  I also quite liked that one mystery was left unresolved.  The titular character and his sidekick, Old Man, provide an eerie backdrop to events and add to the overall atmosphere of mental derangement.

I would hate to live on Shady Lake Lane, but reading about its residents was fascinating, if frightening.

Roscoe hesitated to say it, inhaling the night air and letting it go stale before breathing out, “He told me that he saw a man… on our roof late last night.”
Silence.
No quick-witted response, no comment on the assertion’s craziness and, most quizzically of all, no questions.  The neighbours stood in the humid dark eyeing each other as if visually questioning each other about whether any of them would willingly believe such a story.

– Michael Stephenson, The Man on the Roof

You can buy The Man on the Roof on Amazon right now!

One thought on “Blog Tour: The Man on the Roof – Michael Stephenson”