*I received free copies of these books via Authoright’s blog tour.  The decision to review and my opinions are my own.*

The series “Witchy Travel Tales” tells the story of 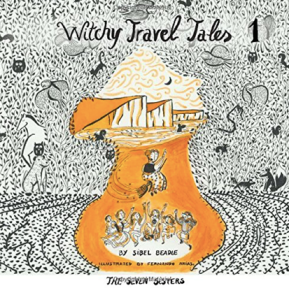 a witch called Miranda who has seven beautiful daughters. Miranda and her daughters cross seven seas in search of a better home. One stormy night they land on the Seven Sisters Cliffs, south of England.

This book is the first in a series of books that tells the travel tales of the witch and her seven daughters, who explore the beautiful land they have arrived in and visit ancient sites throughout England and the World in search of magic.

Bookshine review:  These books are so appealing to a bookish parent!  Fernando Arias’ illustrations are gorgeous and remind me of old-fashioned fairytales, and the whole premise of the plot is very educational, as the witch and her daughters explore some prominent English landmarks.

This first in the series really sets the scene and introduces the characters.  It was very pleasing to my ordered nature to meet each of the seven sisters individually and learn a bit about them and their unique powers, preferences and skills.  My favourite element was the addition of a map and spell at the end, so curious little witches can go on their own adventure to try out what they read about. 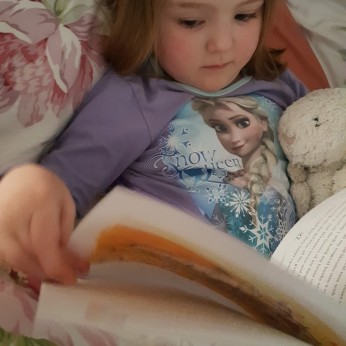 Minishine is currently 5 and really enjoyed this story, although she found some elements a little scary (see her review for details).  We did find it better to spread the book over more than one bedtime read too, as it is quite wordy for her age.  I think by next year these books will be on her go-to list for reading by herself.

Minishine review:  *big thumbs up and grin*  I love the pictures and all the different girls and they go on adventures.

But my not very favourite one was the girl who turned into a cat.  Who was that one?  Mimi?  Yes, Mimi.  That was a bit scary a girl who was a cat.  Even though she was nice.

I liked the golden magic rabbit best because he was just a rabbit not a person, but he was magic.  And golden.

Once upon a time there was a witch called Miranda, who had seven beautiful daughters. 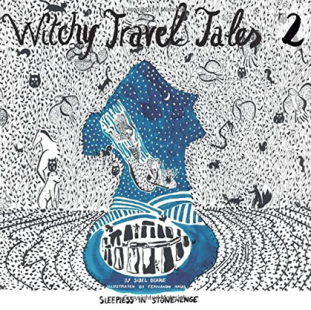 This book is the second in the series. One of the witch’s daughters, Viva, is scared at night and struggles to fall asleep every night. Her mother, the witch, takes Viva on a trip to Stonehenge, to activate an ancient spell that helps the little girl, fall asleep going forward.

Bookshine review:  This one was always going to resonate with us, as we are a family with big imaginations and therefore lots of lovely dreams and hideous nightmares.  I LOVE that the author included the spell to prevent nightmares, and as we don’t live too far from Stonehenge we will be making a little trip this summer to try it our for ourselves! 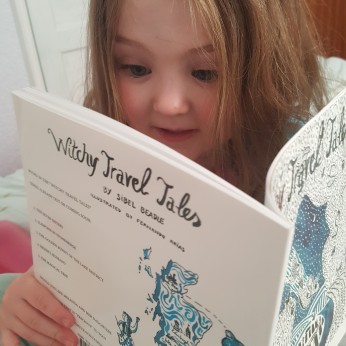 Minishine review:  I really like the picture of the snowy house!

In this story the girl, Viva, had nightmares, like me.  And they went on an adventure to some big stones and lots of witches did a spell, and the spell was to make her nightmare go away.  Can we do that spell Mummy?

Actually I’m not scared of Mimi in this one because she was nice and looked really funny… a cat in a dress!  *giggles*

But I was scared of this bit *leafs through book and points to picture of nightmares looming over Viva* because of the scary monsters.  When can we do the spell?

Miranda’s fourth daughter, Viva, was a lovely little girl with a vivid imagination.  Viva means ‘to live’ in Italian and this pretty much summed up what Viva was all about.  When Viva entered a room, the whole space lit up.  She was a little girl that wanted to see everyone happy and she brought laughter wherever she went.

But when it got dark outside all of this changed and Viva became quiet and scared.

The Golden Bunny of the Lake District (Witchy Travel Tales 3)

Miranda’s fifth daughter, Kai, desperately wants a pet. Wherever she goes she collects stray animals from bugs to snakes, however, none of these satisfy her dreams of having an animal she can really look after and call her own. Thankfully, a solution unexpectedly appears when their friend Richard reveals that his grandson —a golden rabbit who lives in the Lake District— has the gift of making children’s wishes come true. And so, armed with some spells and a lot of camping equipment Miranda, along with her daughters Kai and Viva, embark on an adventure. The only question is will they manage to find the giant waterfall where Richard’s cheeky grandson lives and return with a cuddly pet for Kai?

(Just a quick note that our copy of this third book was an advance one, and therefore not in the format you would get if you bought it!)

Bookshine review:  Yet again Sibel Beadle has come up with a story that is instantly relatable to children (and their parents).  Last time she dealt with a common fear, and this time it is a common desire, to own a pet of your very own.  As before, my favourite aspect, other than the exquisite illustrations, is the inclusion of spells and locations, that allow readers to get interactive with the stories in a way that most books don’t.

Minishine review:  My best bit was them eating the sausages because I like sausages too!  This was about a girl who really wanted a pet.  We’ve already got two cats, but I would like a dog, or a butterfly.  Can we really go to the places in the book?  Really?  That’s cool!  Are there any more of these books?

“Kai is too young to forge a spell,” Miranda said, “If her life was in danger, she might manage a ‘soft’ spell, but wishing for a pet can hardly be classified as a life-threatening situation.  She is, however, studious and has been practising writing poems in preparation for spell-writing.  Maybe George would enjoy one of her poems?”  Miranda asked.

– Sibel Beadle, The Golden Bunny of the Lake District

All three of the Witchy Travel Tales books are available to purchase in paperback from online retailers like Amazon right now! 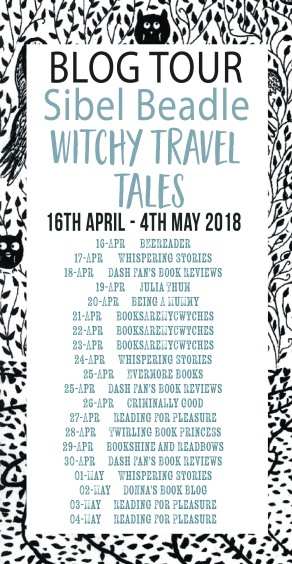