*I received a free ARC of this book.  The decision to review and my opinions are my own.* 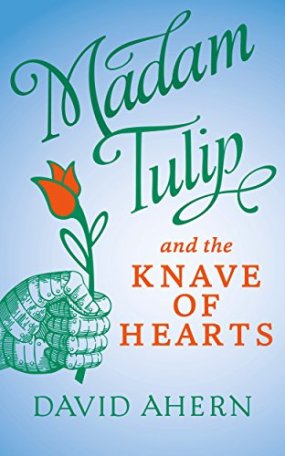 Blurb:  When out-of-work actress Derry O’Donnell moonlights as celebrity fortune-teller Madam Tulip in an English Stately home, she’s trying to make some cash. Instead, she is drawn into an alien world of wealth, titled privilege and family secrets.

A countess once a chorus girl, a gambling earl and his daughters, a cultured and handsome art expert–all caught in a terrifying web of ghastly threats, murder and abduction. As an aristocratic engagement party turns into a nightmare, Derry and her friend Bruce face the prospect of a gruesome and infamous death.

Madame Tulip and the Knave of Hearts is the second in a series of thrilling and hilarious Tulip adventures in which Derry O’Donnell, celebrity fortune-teller and reluctant amateur detective, plays the most exciting and perilous roles of her acting life, drinks borage tea, and fails to understand her parents.

This second book in the Madam Tulip / Derry psychic reluctant-detective series follows a very similar pattern to the first, but with more Derry and less Tulip this time around.

The book, as per the previous, can be divided into two distinct parts.  The first is a psychic mystery investigation of unusual events and strange visions by our underemployed actress hero Derry and her trusty versatile sidekick Bruce, featuring cameos by her humourously aggravating parents as some light relief.  The second is a darker action thriller with dangerous types (it was a Colombian drug lord last time,  this time it is a Russian crime lord), guns and knives and elaborate James Bond-esque escapes.

The switch between the two sections, in both style and content, should be jarring, but in fact is achieved through a gradual increase in pace and tension, and the characters remain consistent, so the transition goes smoothly and it is only when thinking back over the story that I realised that it almost felt like I had read two books in one cover!

I think that the characters and plot set-up established in this series so far work really well and have great potential for further storylines and plot development.  I would like to see the introduction of an overarching story that ties the series together into a larger overall goal, as currently Derry is still feeling her way rather than fully committed to the role assigned to her by the plots to date.

I would also love to see Derry acquire some form of training between this book and the next, in basic self-defense at the very least, as if she is going to accept that her visions lead her into dangerous situations then she needs to also accept that she cannot just rely on Bruce or her parents to show up in the nick of time to rescue her, but needs to be more proactive in matters.

One of my favourite aspects of these books is when Derry-the-actress is subsumed by the older, mature and mysterious Tulip and is able to use not just her ‘powers’ of vision, but her cool demeanour and quick wits to analyse and unsettle the bad guys.  These are the moments where our hero makes the jump from being a cosy-mystery Everywoman to someone unique and intriguing, whilst retaining her distinct voice.

And yet again, I would like to know how the author managed to have me suspecting every character (except Derry) at some point or other?!  Even the ones that were previously ‘cleared’!  I was genuinely still guessing at who was involved in what shenanigans right up until the reveal moment, which is highly unusual for me as a prolific mystery reader.

As you can tell from the above observations, I am fully committed to this series now as a reader, and will be waiting anxiously for the next installment to see whether Derry is ready to embrace Tulip and the responsibilities that come with her powers, and continue to avoid entanglement in the parental snares!

What can you say to the accusation that two unfortunate things that occurred in your life were suspiciously connected by the indisputable fact that they both happened to you?

– David Ahern, Madam Tulip and the Knave of Hearts

You can check out my review of Madam Tulip, the first book in this series, here.