*I received a free ARC of this novelette in exchange for an honest review.* 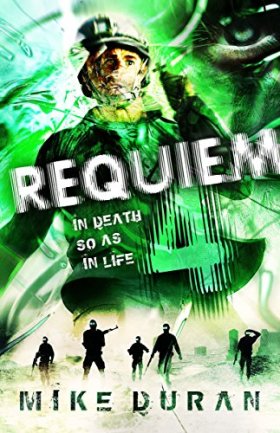 And Requiem 4 is here to clean things up.

In a dystopian, war-torn future where a godless global network reprograms the masses for compliance, the Requiem units are a dying breed. Manned by sciocists—scientific exorcists—and armed with state-of-the-art technology, the units sweep cemeteries of ‘latent soul energy.’

However, there’s a lot more than just ghosts in Graviton.

Father Aguste Lax, military chaplain to Requiem 4, has his own doubts. The cross around his neck is a feeble reminder of his waning faith. Yet when they encounter a Type Six entity, no amount of quantum firepower can save them. Lax becomes their only hope for escaping Graviton alive. But can his faith prevail against an evil this ancient? Or will Graviton Cemetery become the final resting place for Requiem 4?

In religious terms a ‘requiem’ is a Mass for the repose of the dead; may they rest in peace.  That is highly relevant information when it comes to this novelette, in which we follow the Requiem 4 unit as they attempt to sanitise Graviton cemetery by either laying to rest the souls of the dead, or dispersing residual energy depending on which belief system you adhere to.

So far, so paranormal/religious short.  However from the start of the story the reader is aware of the big bad ‘something else’, and the team quickly realise that there is a problem.  From that point on, the tone of the story changes, and the remainder is a chilling, nightmarish plunge into a space where the rules of science and society no longer apply.  In fact, never did.

This story is definitely horror, wrapped up in any number of darkest fears from sci-fi, fantasy, Christian and dystopian fiction.  The imagery is more disturbing than graphic, and most of the horror is in the mind of the reader, rather than the text, which is exactly as it should be!  There is a large element of Christian faith introduced in the form of the exploration of ‘The Preacher’ and his beliefs, or lack thereof.  Personally I didn’t find it overpowered the momentum of the story:  there was a good balance in the examination of the efficacy of religious trappings and traditions as opposed to true faith (in anything).

The plot is actually very simple and direct.  The emotion is created here in the interplay between the characters; in the absence of direct descriptions of the evil, allowing the reader to imagine their worst; and in the insight into the thoughts and fears of a not very brave, heroic man.

For a short, disturbing read on the dark side of the psyche I would definitely recommend Requiem 4.

The very rules of matter and perspective were distorted here, unsound, as if a single step could take one up a wall or traversing through an entire corridor.  Now the tunnel entrance lay tilted, contorted at a nonsensical angle to the wall.  The dark mucus smeared this surface.  Its droplets pattered the earth, defying gravitational logic as they went.  Even more astounding was that someone was sloughing through this opening.

Requiem 4 will be released on Tuesday 25th July.  If you like the sound of it, you can get a copy on Amazon here.