It’s been a while since I last posted a Minishine review, but Bow has forced my hand this week by demanding the same two stories so repetitively that eventually his doting big sister concluded that he MUST want to review them.  As he is just a baby of course, she has kindly offered to speak on his behalf, but has assured me that it will be an accurate representation of his thoughts and opinions.  Okay then…

Set in West Africa, this story follows Penda as she carefully carries a bowl of milk to her Daddy.

Babybow’s review:  *He happily points at multiple things on every page.  He is particularly enamoured with a ginger cat that appears in every illustration without being mentioned in the story.  He likes to find said cat, then wisely observe ‘TAT!’  We generally agree that yes, it is a cat.* 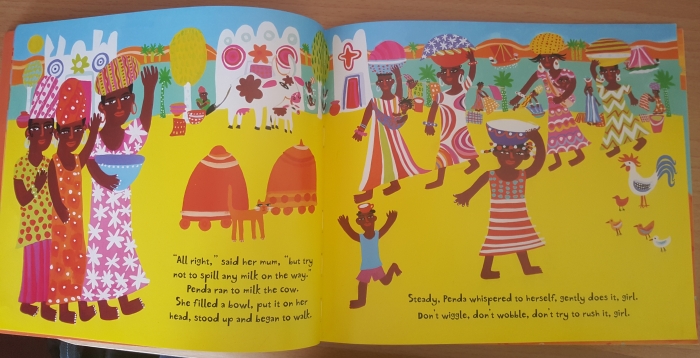 Bookshine’s review:  I love the bright colours and vivid flat imagery of the illustrations, and there is lots of detail (and a cat) to point out and discuss on each page.  The writing has a lovely singsong rhythm and internal rhyme structure that makes each page like a short poem.  The story is lovely:  the little girl’s effort for her beloved father, and his wonderful response when disaster strikes are both excellent lessons without being preachy.

This book has been one of our biggest library sucesses.  We have taken many books out over the years, and most are read, enjoyed and returned without comment.  This one brought a smile to Mini’s face immediately on opening (aged appoximately 1 yr at the time), and she demanded it again and again, to the point where we bought her own copy to allow someone else access to the library one!  It’s great to see Bow choosing it in turn years later.  It shows the lasting value of the book, and the great taste of the small Shines! 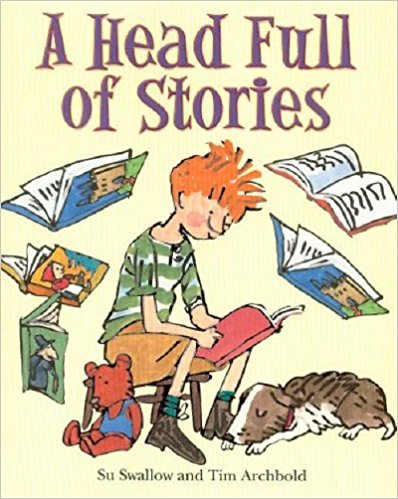 A boy tries to empty his head of fairytales by telling them to his family, in order to make room for a new one.

Babybow’s review:  *He’s very keen on pointing out the ‘GOG!’ and ‘BAW!’ (dog and ball respectively) in this one, but has also been tempted to try more exotic words like ‘Lella’ (Cinderella), ‘Lox’ (Goldilocks) and ‘Hageggle’ (Hansel and Gretel).  He does a passable imitiation of the Big Bad Wolf howling gleefully.* 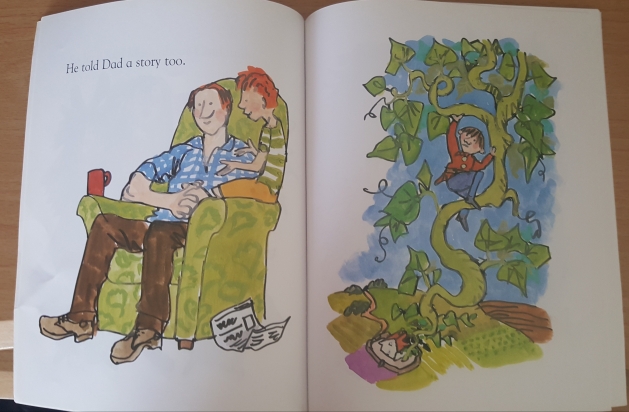 Bookshine’s review:  This one was a bit neglected until Bow brought it to light recently, and I have no idea why because the idea is fantastic and as soon as Mini got the hang of it we’ve been well away!

The idea is that the boy, Jack, tells a different classic fairytale to each family member, but we just get the picture, not the words (for example a picture of a cat in boots bowing to the mayor) and so the reader, or child, gets to tell each story themself.  In our house, I read the written, framing story about Jack, then Mini takes over to tell each story Jack tells.  Sometimes she tells a version of the traditional story:  ‘So that’s Goldilocks and she went and et all their porridge and broke all their things then she is asleep and the bears come the end’.  Sometimes the pictures tell her different stories:  ‘Some bears went for a walk and found a girl’s house and she was asleep in her bed and they didn’t want to wake her up so they played outside instead the end.’  Either way is pretty wonderful.

Even more magical is that Bow has clearly grasped the idea already and when his sister is not around (he tends to enjoy a morning story rather than the traditional bedtime one, whereas the girl loves her lie in!) he quite happily burbles his own attempts for me whilst solemnly pointing at random places on the page to illustrate his point.

The illustrations are similar to the Quentin Blake ones you see in Roald Dahl books, so simple and sketchy but with lots of character and movement.

Two very different, but equally loved choices there from Bow, who no doubt will soon be demanding HIS own book blog.  What can I say… we breed them bookish round these parts!